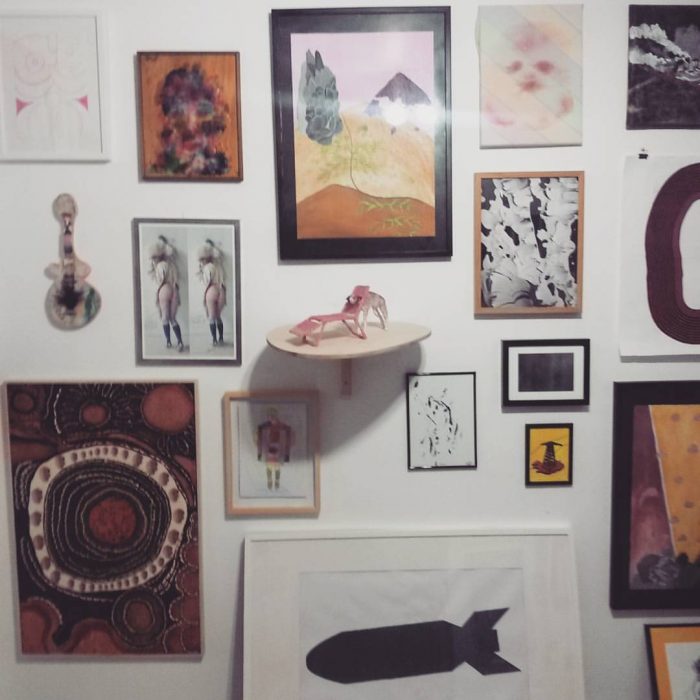 A new (old) trend has developed in recent years in the city of Reykjavik as artists come together and make big salon exhibitions before Christmas with the aim to sell their work. They typically bring simpler works, drawings, self-made publications, small paintings or small-scale objects. Some make works specifically for the occasion, all in the hope of making a little cash in the Christmas month. Mostly young Artist run Galleries host such events, but bigger and more commercial galleries seem to be joining the trend. This year the commercially run Hverfisgalley also has a bazar of sorts and SIM, the association of Icelandic artists is hosting its annual bazar next to their office space in Hafnarstraeti. According to Katrin Inga Jonsdottir who runs the small Artist run Gallery Irma, the trend is about the artist making a little extra money in the Christmas month, “…but it’s also about getting together and celebrating” she informs. Often the bazars become a kind of hangout for the artists, they stop by to see each other and mingle with guests. “Its also a sign of the times, there are so few opportunities for artists to sell their works in Iceland” Jonsdottir told IceNews reporter “its a great chance for people to meet artists and see what their up to, and also for foreign guests to take something authentic and original home with them, make a possible investment and support artists in the process” she concludes.

While browsing around the Reykjavik shopping area, the artists’ Christmas bazars are a must. Ekkisens, Gallery Port, Gallery Irma, Hverfisgalleri and SIM, all host Christmas events in the centre of Reykjavik in December and below is a small summary for those who have intrest.

The annual Christmas Bazar in EKKISENS, an artist run space which aims to promote art works of emerging Icelandic and international artists, opens today at 6pm with the promise of spiked hot chocolate and an array of artist offering their works for sale in a variety of medium. The Gallery is located in a basement of a small blue wooden house in the city centre, in Bergstadarstraeti 25b and it runs trough 23 December

Gallery Port calls their bazar a Christmas art market, and it opened last Friday. They display a mixture of young and old artists and with painting, drawing, prints and more. They will also sport a festive program in the month of December which they promise to announce promptly with readings, concerts and Christmas glue wine. The Gallery is located in a back house in Laugavegur 23b and the marked runs through December 24th.

Gallery Irma is located in Skipholt 33 (behind Bíngó) and is open on office hours. They have a selection of about 20 Icelandic contemporary artists and works in a variety of size and medium.

The Christmas show in SIM (The accusation of Icelandic artists) is titled “Kanill” (cinnamon) opened about a week ago, it’s open on office hours. It is located in Hafnarstraeti 16 in the centre of Reykjavik and it runs thought 22 December.

Hverfisgalleri is the more commercial gallery that has joined the Christmas bazar trend and they open tomorrow 17 December at 2pm, Also located in the city centre, on Hverfisgata 4. They want to light up the dark days and offer guests to stop by and have a look at their on-going exhibition by artist Hildur Bjarnadottir and in their “sofa room” they have new works by a selection of more established artists as well as a editions by their artists.