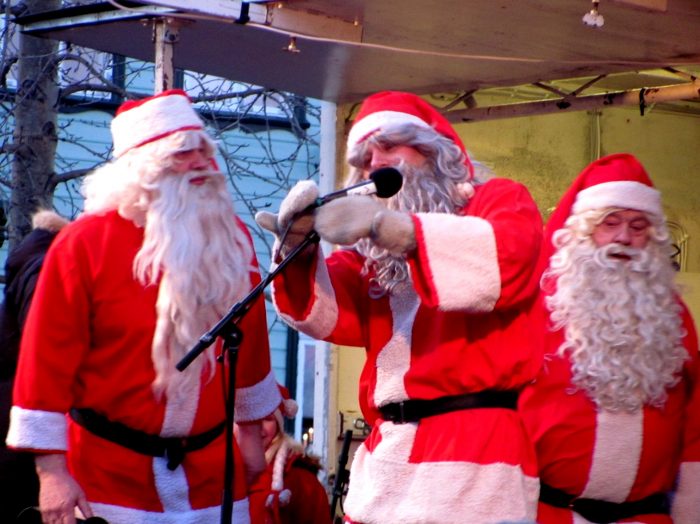 Tonight children in Iceland will place their shoe in the window and the first Christmas man, or Yule lad will come and sneak into all children’s rooms and place either a treat or a potato in the shoe, depending on their behavior on that day. They are the 13 brothers, sons of the frightful Gryla and Lepplaudi. Then each night one by one they descend and place treats in the shoes and on Christmas eve the last one arrives, and with him their parents and the house cat, the terrible Christmas cat.

In Iceland there are 13 mischievous brothers, the Yule lads and many other mythical Christmas beings descend from the mountains and roam the land around Christmas, there is Gryla, the troll woman, mother of the 13 brothers and her husband Leppaludi. There is the giant Christmas cat that eats children if they don’t have a new garment for Christmas and the elves and hidden people also come closer to the human habitations around Christmas. The festivities end on January 6th and the hidden people join the human world and everyone dances around a bonfire together, the Yule lads and their parents included.

The Icelandic Christmas period is healthy mixture of religious practice, traditional folklore and outside influence like the red costume the Yule lads have borrowed from Santa in recent years and the white beard, instead of grey. Christmas officially starts at six o’clock on 24 December and ends on Epiphany, 6 January. Icelanders celebrate Christmas mostly with good food and gifts to loved ones, but unlike most countries that have a single Father Christmas / Santa Claus character, Iceland has the 13 Yule Lads and a range of rather precarious creatures, perhaps a product of the imagination during the harshness of dark winter and the isolation of the community in the olden days. From a relatively young age Icelandic children are told the story of Gryla and Leppaludi living in the Icelandic mountains. There are many songs an fables revolving around her and she is a frightful being. The songs depict her as part troll and part animal and the mother of the 13 Yule Lads. Gryla lives in the mountains with her third husband Leppaludi, her thirteen sons and a black cat. Every Christmas, Gryla and her sons descend from the mountains. Gryla in search of naughty children to boil in her cauldron and the boys in search of mischief.

Each night from here one one Yule lad visits, leaving sweets, small gifts or potatoes. Each Yuletide lad has a specific idiosyncrasy and will therefore behave in a particular manner and there are long songs explaining them in details. One of the old Icelandic folklore states that every Icelander must receive a new piece of clothing for Christmas or they will find themselves in mortal danger. An enormous black cat prowls Iceland on Christmas Eve and eats anyone who doesn’t follow this simple rule. This feline is known as the Christmas Cat and is a very frightening figure, rivaled only by Gryla herself.

The featured image shows the Yule lads lighting a Christmas tree on the main square in the town of Akureyri but the image below shows a drawing of all the 13 brothers and explains each idiosyncrasy. They will be a common sight around Iceland in the days leading up to Christmas, telling jokes, being clumsy and funny and mischievous. 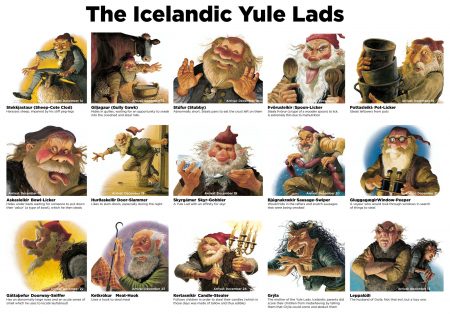