Excitement is mounting in Iceland because of the 2016 parliamentary elections which will be held this Saturday, 29 October. Normally Icelanders would have taken to the polls in late April 2017, but following the anti-government protests this spring in the wake of the Panama paper controversy leading to former Prime minister Sigmundur David Gunnlaugsson of the Progressive party resignation, the ruling coalition announced an early election to be held in autumn. Autumn is here and there is much talk anticipation for the election. Its looks like the current coalition will not hold because the Progressive party has plummeted since last elections. So anything can happen. The main issues of these elections are the constitution, healthcare, tourism and environmental issues, including topics revolving around energy production and power plants to name a few.

The new constitution of Iceland is an issue that the ruling coalition has largely ignored. Between 2009 and 2013, in the wake of the Kitchenware Revolution Iceland’s constitution was profoundly revised through a novel crowd sourced process, in 2012 it secured the support of 67% of the population in a non-binding referendum. The new constitution however, has not been enacted by Parliament yet, and its future now depends on the outcome of this election.

The Ministry of Welfare administrates the public healthcare. One of the issues of the elections revolves around the question of its partial privatisation. There has been much critic about what has been called “the starvation of the public healthcare system”. Currently it’s largely paid for by taxes (85%) and by service fees (15%). A considerable portion of government spending is assigned to healthcare. There is currently almost no private health insurance in Iceland and no private hospitals.

The upsurge of tourism and the environment

The infrastructure for the tourist industry and the countries abilities to receive the upsurge of tourism on the island and its fragile nature are also an issue. It’s an economical and an environmental issue. There have been suggestions to turn the highlands into a national park clashing with plans to increase hydroelectric power plants for big industry.

The Icelandic electoral system and current seats in parliament

The electoral system in Iceland has 63 members of parliament [Althingi] who are elected during the primaries, a closed list proportional representation in multi-member constituencies of 8 to 13 seats. According to Wikipedia, of the 63 seats, 54 are elected using constituency results and determined using the d’Hondt method. The remaining nine supplementary seats are awarded to parties that crossed the 5% national electoral threshold in order to give them a total number of seats equivalent to their national share of the vote. 32 seats are needed for a majority. 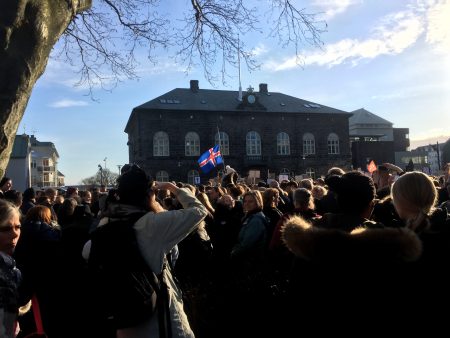 Icelanders frequently gather in Austurvollur park, in front of the Parliament building to speak directly to the parliament.

There are currently seven parties that hold seats in parliament, the right wing conservative Independence Party lead by Bjarni Benediktsson and the right leaning agrarian Progressive party who until recently was lead by the former prime minister Sigmundur David Gunnlaugsson but is now led by the current prime minister Sigurdur Ingi Johannsson. Those two parties hold the majority since the last election and form a coalition. However the coalition seems unlikely to hold after the elections on Saturday. The Left Green party lead by Kartrin Jakobsdottir and the Pirate party lead by Birgitta Jonsdottir have been strong in recent surveys, while the progressive party has plummeted. The Independence party still holds the lead by a few points. Other parties are Vidreisn (Resurrection), a new centre party lead by Benedikt Johannesson formerly member of the Independence party, Bjort framtid (Bright Future) lead by Ottar Proppe, former member of the “Best Party” that held the reigns in the city of Reykjavík famously lead by comedian Jón Gnarr and the Social Democratic party lead by Oddny Gudbjorg Hardardottir.