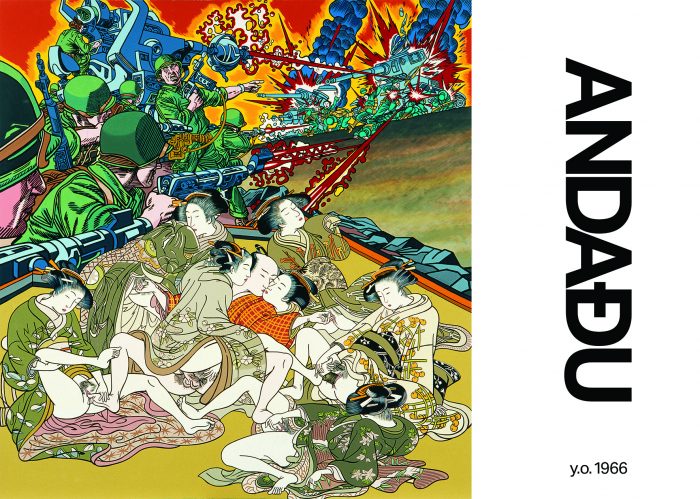 Yoko Ono with One More Story and Erro, with War and Peace will open at Reykjavik Art Museum, Hafnarhus this coming Friday, 7 October at 6pm. The Mayor of Reykjavík, Dagur B. Eggertsson, will open the exhibitions and public is welcome to attend.

The works on Yoko Ono´s exhibition One More Story have in common that they advocate feminism, peace and collective activism, a consciousness about one’s own existence and one’s relationship with the other. The works become a reminder and an invitation to take a responsible, moral and critical standpoint.aims to reveal the basic elements that define On one hand there are the instruction pieces, which ask questions about the conceptual principles behind the work of art, highlighting its ephemerality while de-sanctifying the object, as well as enlisting the participation of spectators in its material realization. On the other hand there are the narratives expressing Yoko Ono´s poetic and critical vision. Yoko Ono will be present at the opening. Curator is Gunnar Kvaran.

War and politics have preoccupied Erró throughout his career. Committed witness and critical commentator of his times as he is, Erró is not for all that a depicter of history: in his works, fiction mingles intimately with reality, to the point sometimes of ousting the latter, taking the latter to a higher level of detachment and abstraction. Curator is Danielle Kvaran. On the same occasion Erro will hand over an art prize from the Guðmunda S. Kristinsdóttir Art Fund. The fund was established in 1997 with the aim of awarding an annual grant to recognize and empower the creation of art by women who have demonstrated excellence in their field.

Another exhibition that opened last Friday at the Hafnarus worth your time is a six-channel video installation, shot in eastern Congo; The Enclave, it’s an immersive 40-minute of ghostly psychedelic magenta landscape blighted by human tragedy in Congo. In addition, a selection of large format photographs from The Enclave are on view. 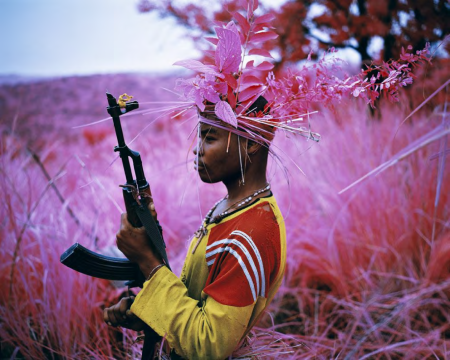 Central to Mosse’s work is the idea that the ubiquity of wartime images has desensitized us to the atrocities of war. Disturbing footage from conflict regions around the world appears on our screens with such regularity that it is often disregarded as simply more visual clutter. Mosse spent the several years photographing the war-ravaged land and people of Central Africa using a discontinued infrared film developed by the military to detect camouflaged targets. By registering an invisible spectrum of light, this film transforms the colour green into a brilliant pink, rendering the landscape in a surreal, psychedelic palette. Armed with his camera, Mosse and his collaborators, cinematographer Trevor Tweeten and composer Ben Frost, embedded themselves into armed Congolese rebel groups. The resulting work, The Enclave, is a magenta-suffused, seductive, morbid and deeply moving installation depicting stories from this troubled region.

Richard Mosse travelled in the eastern part of the Democratic Republic of Congo over four years (2010-14), following and living with paramilitary groups in a warzone riddled with ethnic conflict, massacres and systematic sexual violence. Even though the war has killed millions of people, it has received only scant attention in the international media. This invisibility is the starting point of Mosse´s work, which twists traditional photographic realism in developing a visual vocabulary to make the tragedy visible.

Debuting at the 55thVenice Biennale in 2013, where Mosse represented Ireland, The Enclave is a beautiful and haunting look at a region of Africa that has been plagued by civil war, political instability and humanitarian crises for decades.

Richard Mosse was born in 1980 in Ireland and is based in New York. He earned an MFA in photography from the Yale School of Art in 2008 and a postgraduate diploma in fine art from Goldsmiths, London, in 2005. Mosse has exhibited at the Palazzo Strozzi, Florence; the Weatherspoon Art Museum, Greensboro; the Bass Museum of Art, Miami; the Künstlerhaus Bethanien, Berlin; the Centre Culturel Irlandais, Paris; the Dublin Contemporary Biennial and the Tate Modern, London. In 2014 he was the recipient of the Deutsche Börse Photography Prize.

Newer PostIcelandic MP holds her newborn to breast in parliament
Older PostUPDATE: Katla is quiet, according to assessments