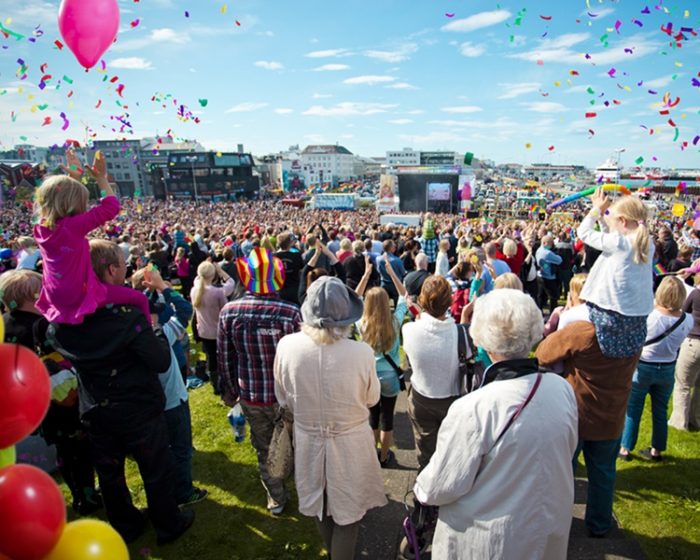 The newly elected president of Iceland, Mr. Guðni Th. Jóhannesson, made history on his sixth day in office, when he addressed participants and spectators of the Reykjavik Pride parade yesterday, according to Gay Iceland

Mr. Jóhannesson was elected the 6th President of the Republic on 25th June and was inaugurated on 1st of August. One of his first acts in office was to participate in the Reykjavik Pride festival in Iceland this week, but not only will it be the first time that the president of Iceland gets involved, it is also the first time in the world that an elected president participates in a Gay pride festival. Thus the new president, a historian with particular authority in the history of the Icelandic presidency, will himself make history.

“For years, I’ve followed the Pride festival and watched the parade in an audience of thousands, with my family, and always enjoyed the festivities immensely – it’s always such fun.” Mr. Jóhannesson said. “So I wasn’t going to change my usual plans and when I was asked to participate in this fine event, I of course said ‘Yes’ right away. I wasn’t even thinking whether somebody had done so while in office as head of state before me or not, that wasn’t the first thing that came to mind. … I feel that it’s a matter of course to support everybody’s fight for human rights in society, queer people’s as well as others’ … if I can do anything to help the cause then I’m honored to do so.”

The Pride Parade is an immensely well-attended event in Reykjavik, attracting tens of thousands of people with a family festival feel to it, the grand family; children, parents, grandparents and even great-grandparents get together to watch the elaborate spectacle. The march ends at Arnarhóll where speakers and musicians entertain, and for the first time, the President of Iceland will address the crowd.

The Mayor of Reykjavik on a float in the parade.

But that’s not all, For the first time ever in the history of the Reykjavík Pride parade, the management team for Reykjavík Pride joined the parade on a float. And to top it off, the mayor of Reykjavík, Dagur B. Eggertsson, and others from the city council joined them on the float and participated directly in the parade. Double history was made this weekend.

Featured image shows the festivities at the end of the parade on Arnarhóll, the stage from which the president addressed the crowd can be seen in far. Image taken from gayiceland.is