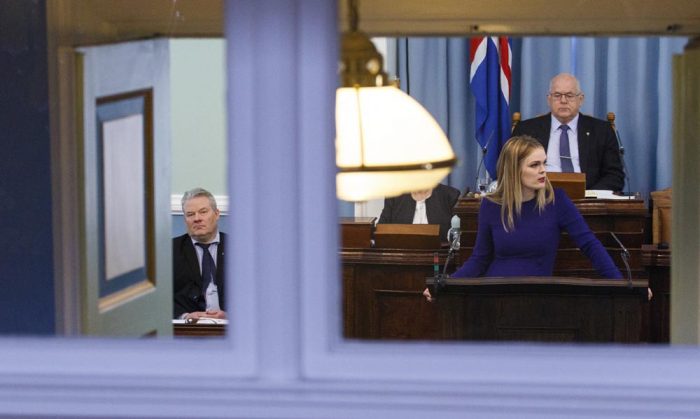 The Social Democratic Alliance is just about to be wiped out of parliament, according to a new poll by 365 media. The party has only six percent support, half of what it got in the last election, which was considered a big loss then. Another party that is not far from being wiped out is the leading party of the government, the Progressive Party. The party that got over 24 percent of the vote in the last election is now measuring with 7.3 percent support, which would give it only five MPs compared to the nineteen the party now has.

The only party that has less support than the Social Democratic Alliance is Bright Future, that has been falling continuously for a long time and is now down to only 2.5 percent support, far from getting an MP into parliament. The Left-Green Movement has 18 percent support.

If this were to be the results of the elections, the Independence Party would get 22 MPs, the Pirate Party 20 and the Left-Green Movement twelve. The Progressive Party would get five MPs and the Social Democratic Alliance four.

Progressives not keen on holding elections in the fall

In light of the polls, it does not have to come as a surprise that many Progressive MPs are not keen on the idea of early elections in the fall. Many MPs from the Progressive Party feel that it was either a mistake or unnecessary to push the parliamentary elections forward to the fall. Some MPs from the Independence Party feel the same way. Sigmundur Davíð Gunnlaugsson, the head of the Progressive Party and former Prime Minister, said over the weekend that he had heard from many people who don’t want early elections, and agreed with them.

Two other ministers from the party have since said that they did not want to hold elections early. Gunnar Bragi Sveinsson, Minister of Agriculture and Fisheries, says that he had always been opposed to that idea. Sigrún Magnúsdóttir, Minister of the Environment, says that there is a strong urge in her party to finish what they had started and put up as a four year plan. The announcement about pushing the elections had been made in a chaotic environment and was made to calm the situation.

The leaders of the government, Bjarni Benediktsson and Sigurður Ingi Jóhannsson, have been clear about their intentions to hold early elections. Benediktsson said in parliament this week that nothing had changed, even though he understands that there are different opinions within the majority about it. “But we started our renewed majority with that in mind. We have not discussed it and will not change anything.”