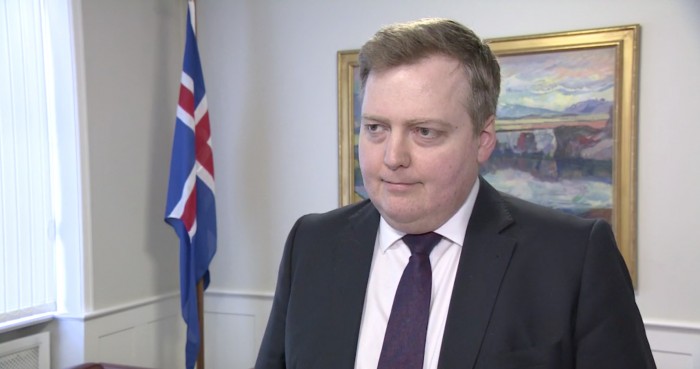 Events unfolded rapidly and seemed to surprise not only the public of Iceland but members of cabinet as well. Bjarni Benediktsson floor leader of the Independent party arrived in Iceland this morning and met for two hours with Sigmundur Davíð Gunnlaugsson. After that meeting the prime minister published a Facebook status where he said among other things that he had informed Benediktsson that if the Independent party no longer supported the government under his leadership he would be ready to dissolve parliament.

He then promptly went to Bessastaðir, apparently to ask the President Ólafur Ragnar Grímsson to dissolve the parliament, a request the president denied – for the first time in the history of the republic of Iceland. After that meeting the President of Iceland gave an impromptu press conference where he explained that he needed to hear both sides before making such decisions. When reporters asked the prime minister about the proposition to dissolve parliament, he replied, “have a look at my Facebook site, it´s a better source that some things you hear at press conferences” referring to the presidents press conference, implying that he did not have the same understanding of the meeting with the president as was expressed at the press conference, further perplexing the public of Iceland. Just after three o’clock today Sigmundur Davíð Gunnlaugsson finally announced his resignation on the term mentioned above.

Bjarni Benediktsson who’s name also comes up in the Panma Papers, as havingg had offshore assets, said he does not make a claim to the prime minster’s chair and said it remains to be seen who will take that chair. He said the was grateful to the president for his reaction not to dissolve the parliament and he said that prime minister Sigmundur Davíð Gunnlaugsson was clear in their meeting earlier that day, that either the independent party supported him and the current government completely or he would dissolve the government, which he seemly tried but failed.

Opposition leaders have reacted and maintain that the terms for the resignation are unacceptable, that Sigurður Ingi Jóhannson, himself a controversial figure, has no authority to power on behalf of the Icelandic people. Protesters are gathering in Austurvöllur in front of the parliament building, although its in a smaller numbers than yesterday.