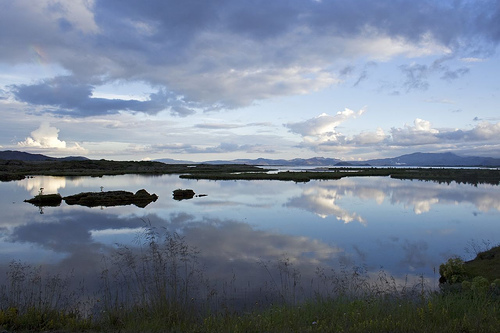 Occasionally reports about a road company bringing constructions to a halt due to neighboring Elf populations find their way into Icelandic headlines. Typically the Elf´s “spokesperson” has protested by contacting a medium in a dream or they have taken more radical action, with work crews waking up to malfunctioning heavy machinery – for example.

It seems that that many Icelanders still believe in the possible existence of elves or hidden people as they call them. This myth from the country’s folk traditions has persisted and there exists a detailed map showing where such sites can be found. The mediums use their psychic or intuitive abilities to convey the message of the hidden people and the road constructions often try to take their wishes into consideration.
These histories date well before road constructions in Iceland and the Iceland’s Saga Foundation compiled and published the map linking traditional folklore, featuring the Hidden People, with locations across the island. Although decoding the stories can be a challenge for those who don’t speak the language, the database gives an insight into the volume of the tales. Sagnagrunnur, roughly translated as “history base”, is an archive of Icelandic folklore, an online geographically mapped database containing the bulk of published collections of Icelandic folk legends, according to the projects website. The database includes a map showing the location of published Icelandic legends, connected to both the homes of the original storytellers, the collectors and the places mentioned in the legends, if they can still be found. Most of the legends are derived from collections made between the middle of the 19th century and the beginning of the 20th. Work on the database started in 1999 by Professor Terry Gunnell, then lecturer in Folkloristics at the University of Iceland. He was inspired by the work of the late Swedish folklorist, Professor Bo Almqvist of University College Dublin, to whom the database is dedicated to. The latest version of the database is from 2014 and its the end result of an intensive re-structuring which now includes geographical mapping of a large number of the place names.