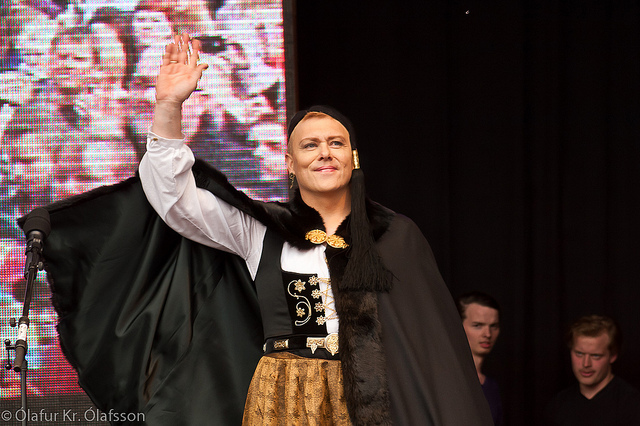 Artist and comedian Jón Gnarr, former major of Reykjavik, and until recently potential presidential candidate, took over the Channel 2 news show Iceland Today, subsequently canceling the show and replacing it with his own Iceland Today Tonight. He used the airtime to announce that he would in fact not make himself available for the Icelandic presidency, however not dismissing the possibility to do so for a later term.

During the show he described how he is frequently asked if he misses serving as the major of Reykjavík, and his answer; No, I don’t miss it. However he went on to explain that no one ever asks him if he misses the showmanship, if misses being an actor.

The answer: Yes, he misses his life as an actor and wants to devote himself to acting and producing new Icelandic television material. Gnarr is currently executive producer of domestic programming with the mass media company 365 which operates eight TV stations, five radio stations, one newspaper and a website.

Gnarr´s comedy partner, Sigurjón Kjartansson promtly announced as well that he completely eliminates the possibility of running for the presidency, underscoring the current state of suspense in Iceland as there is much public speculation pondering the possible candidates that might be eligible to run for president this year, few have confirmed. Mr. president Ólafur Ragnar Grímsson has announced that he is not running for a sixth term but he has served as the president of Iceland since 1996.

Icelandic presidential elections will be held on June 28 this year.