Mme Segolene Royal the minister for Ecology, Sustainable Development and Energy in the government of France is on an official visit in Iceland during the days of 27 – 29 July 2015 upon the invitation of Icelandic Foreign Minister Gunnar Bragi Sveinsson and Minister for Industry and Trade Ragnheidur Elin Arnadottir.

Mme Royal is one of the most influential figures in French politics for the last decades.  Her main objective is to have discussions with the Icelandic authorities about the use of sustainable energy in Iceland and about the United Nations 21st Conference on the Framework for Climate Change. France will be the host country and Mme Royal will have a large responsibility in that context. 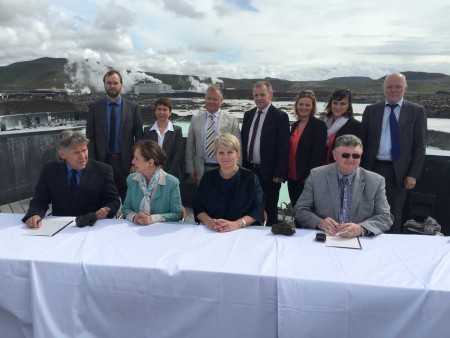 During the minister’s visit in Iceland, the Iceland Geothermal Cluster Initiative and its sister organization in France GEODEEP signed an agreement to cooperate in creating a framework of standardized model licenses for exploring, realizing, and developing geothermal energy resources.
This agreement is a landmark signing between the two clusters and could be used to create a general consensus for developing geothermal projects worldwide.

During her stay in Iceland, Mme Royal will also be meeting Iceland’s President, Olafur Ragnar Grimsson and Minister for the Environment and Natural Resources, Sigrun Magnusdottir.

Newer PostIceland: Investigation into thousands of sheep deaths
Older PostArrests up but crime down in Reykjavik