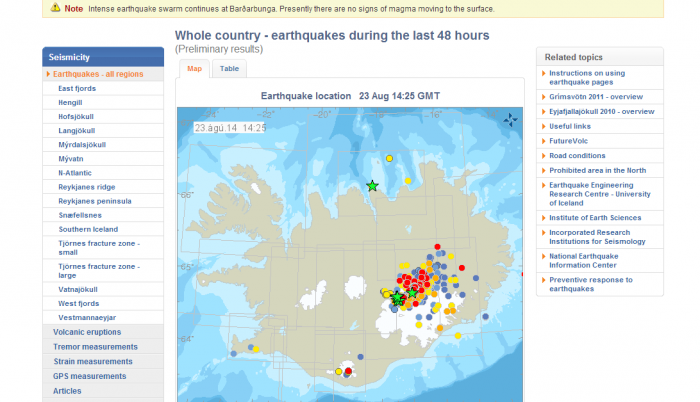 The eruption in Holuhraun continues, with no signs of abating. The lava continues to flow to the east north east and
has grown in area since yesterday. This morning RÚV (The Icelandic National Broadcasting Service) reported that new eruptive fissures had
opened to the south of the on-going eruption. A 8:30 surveillance flight with scientists from the Met office and
University of Iceland confirmed this; two fires south of the previous eruption site in Holuhraun, in a graben which that
had formed above the intrusion, about 2km away from Dyngjujökull.

The eruptive fire fountains from the new fissures
are substantially smaller than in the older fissure. The cauldron in Dyngjujökull seems to have grown deeper since the
last observation. No changes are visible in Bárðarbunga. Considerable activity is in the northern fissure (fissure 1) and
the height of the steam cloud is about 15,000 feet.

Seismicity in the area is similar to yesterday’s activity. About 270 earthquakes have been detected from midnight to
noon; two earthquakes of magnitudes 4, 4 and 5, 3 in the Bárðarbunga caldera region at around midnight UTC. GPS
displacements continue to decrease. Measurements show a slight increase in conductivity in Jökulsá á Fjöllum.
Substantial amounts of sulphur dioxide (SO2) are still being released to the atmosphere in association with the
eruption.

There are no reports of ash fall.

Important Precautionary measures:
The closures of the area north of Vatnajökull are still in force. All roads leading to the area are closed. Permissions to
scientists and media for access to limited parts of the area, have been withdrawn, due to new fissures near
Dyngjujökull glacier. This is a precautionary measure due to the danger of floods in case of an eruption under the
glacier.

Sulphur dioxide emission continues. In case the area is opened for scientists and media, it is essential that anyone,
who is near the eruption site is equipped with gas sensors and gas masks. The Administration of Occupational Safety
and Health stresses that it is crucial for all institution and companies working in the area to conduct a risk assessment
and response plans according to regulation (nr. 920/2006).

The road to Dettifoss on the West side of Jökulsá á Fjöllum (No 862) has been opened for traffic from the ringroad 1
to the Dettifoss waterfall. Other roads on the west side are still closed, including hiking trails. All roads leading to the
volcanic site are closed, based on the risk of a flood if an eruption will start under the glacier. Information on closures
can be found on the Icelandic Road and Coastal Administration web page: http://www.vegagerdin.is/media/umferdog-
faerd/Halendi.pdf
The Aviation Colour Code for Bárðarbunga remains at ‘orange’ and the code for Askja at ‘yellow.