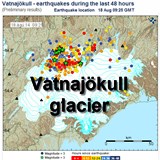 Seismic activity in Bárðarbunga, a large sub-glacial volcano in Iceland, has increased. A seismic swarm has been ongoing since 3AM this morning, and near continuous earthquakes have been occurring ever since.

The depths of earthquakes in the present swarm are in the upper crust and their magnitudes are mainly around 1.5; a few earthquakes are of magnitude greater than ML3. According to geologists, there are no signs of magma moving to the surface presently. The seismic activity abruptly started on August 16th and is still ongoing.

According to the Icelandic Met Office, an earthquake of magnitude 3.8 occurred at 02:37:19 this morning (18th August) about 2.4 KM NNE of Kistufell in northwestern part of Vatnajökull. Reports are indicating that it was felt in Akureyri, N-Iceland. This is the most intense earthquake swarm in this area for years; measurements also indicate magma movement.

In historic times there have been large eruptions every 250–600 years. Þjórsá Lava is the largest Holocene lava flow on Earth. It originated from Bárðarbunga about 8.500 years ago, with a total volume of more than 21 cubic kilometers with some estimates stating as high as 30 cubic kilometers. The lava field covers approximately 950 square kilometers. The largest eruption from Bárðarbunga had a VEI of 6; many smaller-sized eruptions have been recorded in the past 10.000 years.

Large volcanic fissure eruptions occur every 5–800 years in Iceland. They often occur in the Veiðivötn area, south-west of the Bárðarbunga central volcano. Such an eruption would endanger many of Iceland’s hydroelectric power plants as each eruption changes the landscape dramatically. Tephra from a large eruption from the Bárðarbunga volcanic system could affect flight traffic and temperature in northern parts of the world