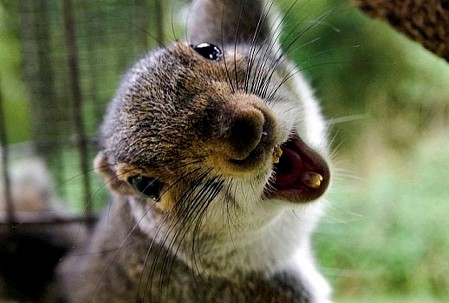 Two baby squirrels who suffered a vicious cat attack on their nest in the Norwegian town of Gressvik, just south of Oslo, have lived to tell the tale after being treated with a special formula milk.

Gressvik local Nina Oppedal awoke to find the squirrels lying almost motionless in her garden and said she had to try to save them. She explained that her and her husband searched the internet to find recommendations for keeping them alive and eventually learnt that keeping them warm and feeding them was the best option.

At first, the couple fed the squirrels, who they named Carlos and Arne, lactose free milk. However, after taking them to a local vet they later started on a diet of special formula milk that is normally used for sick kittens. She said they now must feed them every three hours, which can get tiring.

The couple had been monitoring the squirrel family for a number of weeks since noticing the parents of the sick squirrels had moved into a bird box in their garden. A short time after, the mother gave birth to five baby squirrels, of which Arne and Carlos are thought to be the sole survivors.

The squirrels are now around four weeks old and are yet to open their eyes, but Oppedal said that when they eventually do she hopes the caring process will become much easier. She added that they have been told it will be safe to release them into the wild after around two years.