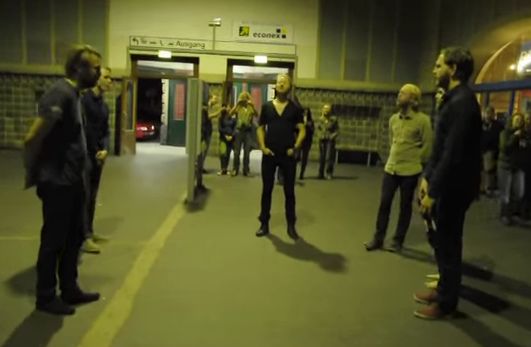 Asked to think of an Icelandic musical act, the majority of people are likely to name Björk; other music enthusiasts may call out indie rock band Of Monsters and Men, who had a Number 1 hit on the US Billboard Alternative Songs chart in 2012.

However, in the past year a new group has shot to stardom in the most bizarre of fashion. In 2013, Árstiðir were at Wuppertal train station in Germany when they decided to stage an impromptu performance, singing a 13th century hymn from their homeland. They uploaded their performance of the song, which has a title that translates to Hear Heaven Carpenter, to YouTube last September and became instant stars.

A month later, Árstiðir had gathered more than 215,000 hits, and at present it is sitting on nearly 2.8 million views.

The band’s success is being driven, in part, by a number of renowned celebrities, including Michael Baker, who posted the clip on his Google+ page, which has had more than three million views, and told his followers to listen to the song with their eyes shut and “be transported”.

Another who shared the video was author Dennis Lowery, whose Google+ page has more than 1.4 million views. He described the song as “beautiful”, saying this is what happens when you perform an 800-year-old hymn at a train station.

Árstiðir, which is made up of Gunnar Már Jakobsson, Daniel Auðunsson, Ragnar Ólafsson and Karl James Pestka, are due to release their third album in September.