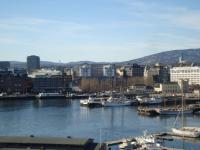 After sweeping the streets of Norway’s capital Oslo clean of prostitutes last year, city police were a bit shocked to discover that the pros are back and their numbers are just as high as they were before the clean-up effort. Oslo passed a ban on open prostitution and the purchase of sex services in 2008 in a bid to clean up the image of their city.
But the Aftenposten newspaper reports that the number of sex workers on the capital’s streets is almost back to its pre-ban levels. Local police were surprised by the finding, but promised a quick reaction.

Oslo’s Chief Inspector Oeyvind Norgarden told the Aftenposten “The number is surprisingly high, and the customers must be caught.” The police chief promises to increase the frequency of patrols along the city streets, even throughout the night. One aim is to catch the customers red-handed in the illegal act.

Norgarden also claims his police will check out every prostitute they run across and check if their residence papers are correct. Most of Oslo’s streetwalkers come from Eastern Europe and Nigeria, according to the police. If they are found to be living in Norway illegally they can be deported.