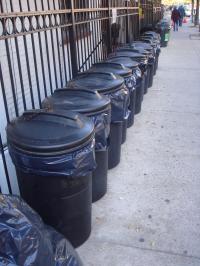 A new report released by Eurostat, the European Union’s official statistics office, has determined that Danes generate the most amount of rubbish out of all 27 EU member states. The Czechs earned the distinction of being the most thrifty when it comes to making waste.

Eurostat found that the average European created 522kg of municipal waste in 2007. This excludes agricultural and industrial waste, instead focusing on waste generated from households and small businesses. The EU Observer newspaper reported the findings of Eurostat, which found each Dane dumped about 800kg of refuse on the street for municipal pickup in 2007. Cyprus and Ireland were close seconds, both creating more than 750kg per person.

In general, the wealthier western EU nations threw out the most trash, while eastern European nations produced less waste. The Czech Republic took the title of thriftiest, producing less than 400kg of rubbish per person. Slovakia, Poland, Romania and Latvia also generated less than 400kg on average per citizen.

On average, about 42 percent of this waste is dumped into landfills and 20 percent is incinerated. However, on the plus side, 22 percent of waste is recycled and 17 percent is composted. Sweden, Belgium and Germany recycle the most, while in Bulgaria 100 percent of its rubbish ends up in landfill.