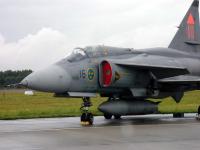 Discussions over establishing a joint Nordic air patrol that would monitor the regions of the Arctic Sea where ice is disappearing are currently under consideration by the Nordic countries. As global warming causes the normally ice-choked Arctic Sea to break up, the prospect of opening shipping routes through the region is now a real possibility.

One effect would be that Scandinavian fighter planes would patrol the air space over Iceland beginning in 2010. Sea surveillance and rescue operations would also be stepped up as Arctic shipping lanes become increasingly busy. In time, the entire Arctic region would be monitored by a joint Nordic satellite system.

Stoltenberg’s proposals were met with general enthusiasm during their unveiling in Oslo. Although no country has made any commitment yet, the next step will be for each Nordic nation to state how they would react “if some Nordic country were to be the target of an external attack or improper pressure.”

Even if defence cooperation between the Nordic nations is increased, it would not amount to a formal military alliance. Each country now has until May to evaluate the proposals, at which time official positions will be presented.