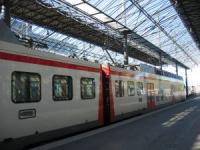 Finnish Railways (VR) announced last week that it will be upgrading its existing rail link between the capital Helsinki and Russia’s St Petersburg. The new high-speed service, which is named Allegro, will begin operations in 2010.

According to the Helsinki Times, VR has joined forces with Russian Railways to create a new company called Karelian Trains that will purchase and operate the new rail link between the two countries. The Allegro trains, which are being built by the French company Alstrom, will have a top speed of 220 kilometres per hour. This will reduce the travel time between Helsinki and St Petersburg to just three hours from the current journey time of five and a half hours.

The new train carriages will have a white background with red, blue and silver stripes inspired by a fusion of the colours of the Russian and Finnish flags. A joint statement released by VR and Russian Railways said: “Ease of pronunciation and usability in the Finnish and Russian languages as well as internationally were subject to special attention in the name selection. Inspiration for the new trains’ livery came from the colours of the Finnish and Russian flags.”