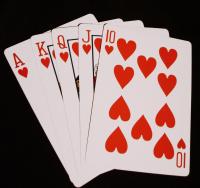 Danish professional poker player Peter Eastgate set a new record by becoming the youngest person to win the World Series of Poker’s main competition, earning himself a tidy USD 9 million for his card skills. The 22 year-old from Odense, Denmark broke the previous record held by poker legend Phil Hellmuth, who in 1989 was the youngest player to win the main event at the age of 24.

Eastgate told Marketwatch: “It’s an honour to hold the record as youngest World Series of Poker Main Event champion. I played really solidly throughout this tournament and I’m proud of that. This gives a new level of credibility for young online players.”

Eastgate, who is sponsored by PokerStars, is now one of Denmark’s top ranking cash winners having won several tournaments both online and in Europe. Eastgate’s teammate, PokerStars Pro Daniel Negreanu, confessed, “I’m impressed by the way he played this tournament. He is testament to the young, up-and-coming European players in the poker field. Peter is the kind of player who is not afraid to put you under pressure in a game.”

Known for his extremely aggressive playing style, the soft spoken Eastgate went into the final round of the tournament in fourth place with USD 18 million in chips. But by the time the game was down to two men, Eastgate’s USD 79.5 million in chips was able to take down Russia’s Ivan Demidov’s USD 57.7 million in little time.