The Imagine Peace Tower, constructed in 2007, is an artwork created by Yoko Ono which is dedicated to her work with John Lennon towards achieving world peace. 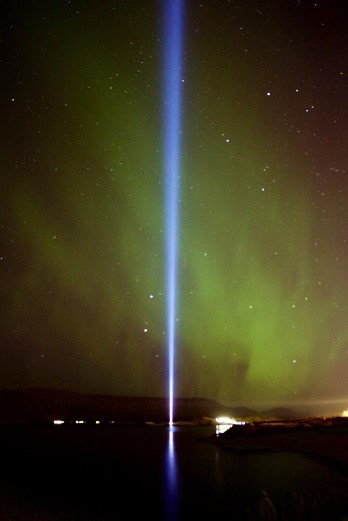 The lighting is annually held on October 9th until December 8th, these dates are the anniversaries of John Lennon´s birth and death respectively. The art piece has the phrase ‘Imagine Peace’ written in 24 different languages.

At 8pm the tower illuminates a powerful bright light high into the sky that appears differently depending on the weather – in a clear sky the light is a bright white pillar, but in rain or snow the light refracts into the colours of the rainbow.

The tower is also lit for other occasions throughout the year, such as Ono´s birthday on February 17th, Winter Solstice on December 21st – January 1st and the first week of spring to commemorate John and Yoko´s wedding anniversary and honeymoon.

The tower base can be found on the island of Viðey outside of Reykjavik Harbour on Kollafjörður bay but can be seen from vast distances when lit. The tower is to symbolise a reminder that peace and love is what connects all lives on Earth. If you wish to be involved, you can send your wish to the Imagine Peace Tower.