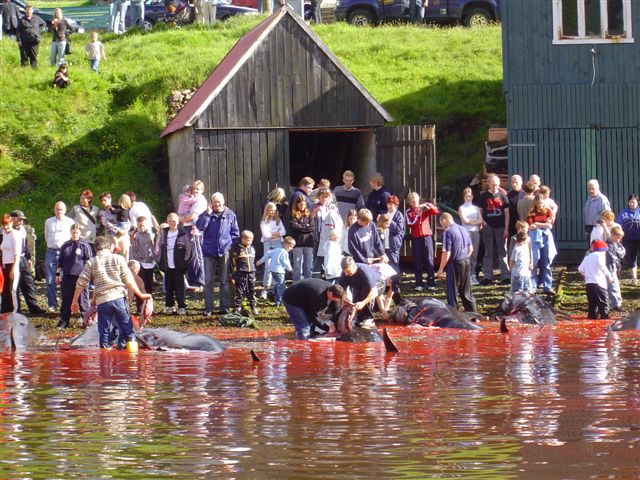 The Faroese have hunted the long-finned pilot whales in a tradition known as the Grindadrap for as long as anyone can remember. The earliest mention of Grindardrap is in a Faroese book of law from 1298. It’s a non-commercial whale hunt organized by the community, it starts in spring, usually in May and occurs occasionally over the summer months, when the pods of pilot whale pass the islands. The hunt provides a source of local traditional food.

The debate about the pilot whale hunt in the Faroe Islands is unlikely to be solved this summer. Many Faroese consider the whale meat an important part of their food culture and history. Animal rights groups and protesters condemn the harvest as being cruel and unnecessary.

Each spring international attention is directed to the hunt and often the Faroese way of life is rather misrepresented through some of the more misleading arguments made by protestors. While its true that around 800 wild pilot whales are hunted annually, it is also true that the Faroese way of life includes actively living of the land and nature, and in the fragile ecosystem they are greatly concerned about the sustainability of their natural resources.

The pilot whale hunt in the Faroe Islands has an understandable bad reputation. The images from the hunt are gruesome and the sea turns read with the blood of the whales. While in the olden days the hunt was an essential source of food for the Faroese, in present days, the killings are more about tradition and a traditional way of life, for which those wild animals are killed. The hunt is clearly no longer a necessity for the islanders, but there are also some unfair misconceptions regarding the killings.

One of them being that the pilot whale is an endangered species, the hunt is illegal and the animal is gauchely hacked to death. The hunt is legal and the pilot whale is not an endangered species. Looking at the imagery of the killings it really looks like a bloodbath. When the pods of pilot whale pass by the Faroe Islands they are herded toward a certified shore by boats. They are then gatherd in shallow waters and killed with a spinal lance, which should sever the spinal cord of the animal and cut off blood supply to the brain, so the animal looses consciousness and dies within seconds, if its done right – the hunters need a special license to be a part of the hunt.

The laws about Grind killings was updated in 2015, where one of the regulations demanded that the whalers followed a course on how to slaughter a pilot whale with the spinal-cord lance, in order to kill each individual swiftly and as painlessly as possible. The law also takes to the sustainability of the hunt; around 800 animals are killed annually.