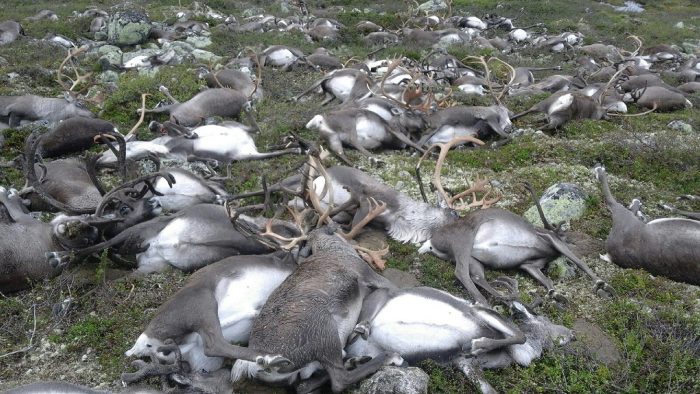 Lightning storm in a mountainous area of Telemark County in Norway killed 322 reindeer this weekend. The Norwegian Institute of natural science say there are known cases of reindeer being killed by lightning but never before in such magnitude. Vísir reports trough NRK.

“There was a thunderstorm recently and we think lightning is the most likely explanation of the deaths” Knut Nylend explained to NRK reporter, “The carcasses are lying scattered on a rather small stretch of land, they must have been standing huddled up together when the lightning hit.”

There is an estimate of ten thousand animals in the whole area, but the group in question was standing on a patch of approximately eighty square meters. The scientist will examine the corpses, confirm the cause of death and try to make use of the tragic event to examine if any of the animals were inflicted with the brain disease that came up in the reindeer population earlier this year. No decision has yet been made as to how to dispose of the carcasses, if they are to be buried on location or relocated and destroyed by other means.