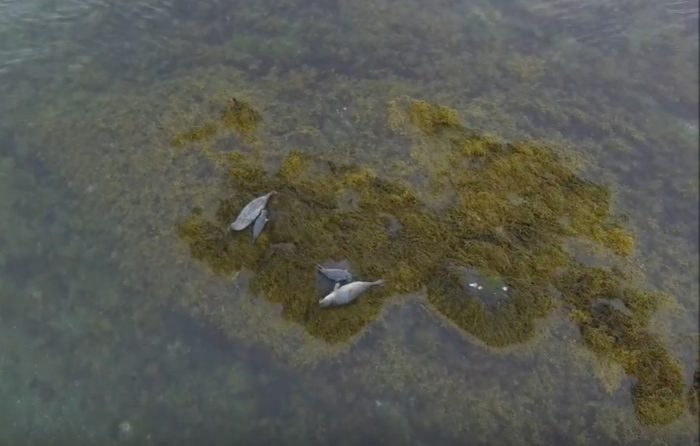 A video was captured last week of new born baby harbour seals and their mothers on a skerry in Isafjardardjup, showing the bond forming between mothers and their pups in a unique way. In June the female gives birth to one pup. At birth the pup is covered in grey hair, it is usually around 80 cm long and can weigh close to 10 kg. The female nurtures the pup for 3 – 4 weeks, but after that it has to take care of itself. It is important to note that sometimes the mother leaves her pup on the shore or on a skerry for a period while she goes to search for food. When humans happen upon a seemingly abandoned pup they sometimes remove it in a misguided attempt to help it or save it. It´s important to leave the animals alone in this fragile time, how ever if there is clear evidence of distress or danger for the animal, the best course of action is to contact the Icelandic Seal Centre and ask for advice.

The harbour seals are not known for extensive traveling, but sometimes the young animals wander off. Older animals come back to the same seal colony year after year, most likely their own birth colony. In August the adults shed their hairs and the mating season begins. After mating the harbour seals move to scars and small reefs, further from the shore, to look for food. Their food supply consists of fish such as small cod, redfish, baitfish, coal fish, herring, catfish and various flatfish. The harbor seal is distributed over the northern hemisphere, but is not found in great capacities in the Arctic Ocean. The world’s harbour seal stock is estimated around 400.000 animals, but it has slowly reduced in the last years mainly because of a virus disease in the North Sea.

The beautiful footage was captured and published on You Tube by Róbert Daniel Jónsson, the image is a still from his video and the information is taken from the Icelandic seal centre.