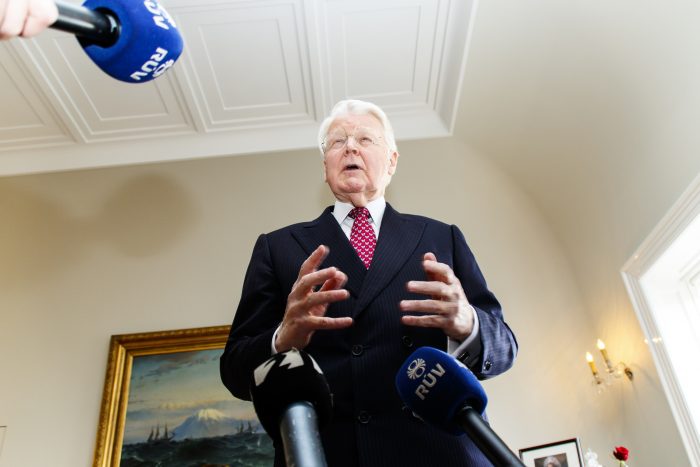 Guðni Th. Jóhannesson formally announced yesterday that he will run for president. Jóhannesson is an associate professor of history at the University of Iceland and has researched the presidency for years.

According to a poll by 365 media, that was conducted on Monday and Tuesday, Jóhannesson has the support of 38% of voters. The poll was conducted entirely before he formally announced his candidacy. The sitting president, Ólafur Ragnar Grímsson, had the support of 45% of voters. The third candidate, Andri Snær Magnason, would get 11% and others less. Jóhannesson is widely thought to be the only candidate that could beat the sitting president, who announced his run for the sixth term in April, after having said in January that he would quit. Grímsson and his wife Dorrit Moussaieff have come under pressure after their finances and Moussaieff’s offshore accounts have been the subject of news all over the world.

In his statement yesterday, Jóhannesson said that he believes that the president must advocate for changes to the constitution, so that a certain percentage of the population can demand referendums. “But changes to the government don’t matter at all if those in power betray the trust and faith of the people. We all, the public of this country, do not ask for much. We do not ask for a perfect society, perfect leaders. We simply ask that those who lead are honest, keep their word and have nothing to hide.” This has been perceived as criticism of Grímsson and other leaders that have been revealed to be in the Panama papers.

President and first lady claim to have never discussed the matter It was revealed this week that Moussaieff had links to offshore companies and trusts, according to leaked HSBC files. She was listed as one of three members of the Moussaieff family who owned a company called Jaywick Properties Inc. in the British Virgin Islands. She also was a beneficiary of the Moussaieff Sharon Trust and would inherit further offshore wealth when her mother, who is 86, dies. Last week it was revealed that Moussaieff Jewellers, the family company of Dorrit Moussaieff, owned part in an offshore company in the British Virgin Islands from 1999 to 2005. In 2005, the company sold its share to the first lady’s parents. That company, called Lasca Finance Limited, is in the Panama papers leaked from Mossack Fonseca.

Grímsson had previously said in an interview on CNN that no revelations about him or his family would come to light. “No, no, no, no, no. That is not going to be the case,” he said. Moussaieff sent out a statement yesterday where she said she wanted to set the record straight because of “speculation and inaccurate statements and assertions made in various press articles.” She denies that she has ever had a bank account with HSBC nor been a client of the bank.

The first lady also says that she has never discussed her families’ financial affairs or arrangements with her husband, as “these are my parents’ private arrangements.”

She says that the company Jaywick Properties Inc. was related to her parents and she did not receive any benefit from it.

The Guardian had reported that Moussaieff is non-domiciled in the UK for tax purposes. Her lawyer will not confirm this but says that she is domiciled in her birth country of Israel.

It caused a stir in Iceland when it was revealed in 2013 that the first lady was no longer domiciled in Iceland. She said then that taxes had nothing to do with it, it was simply because of her family business and her involvement in it. According to Icelandic laws it does not matter where people are domiciled, if they spend the majority of each year in the country, they are obliged to pay taxes of all their assets and income. Those who stay in Iceland less than half the year only need to pay taxes of income earned in the country.