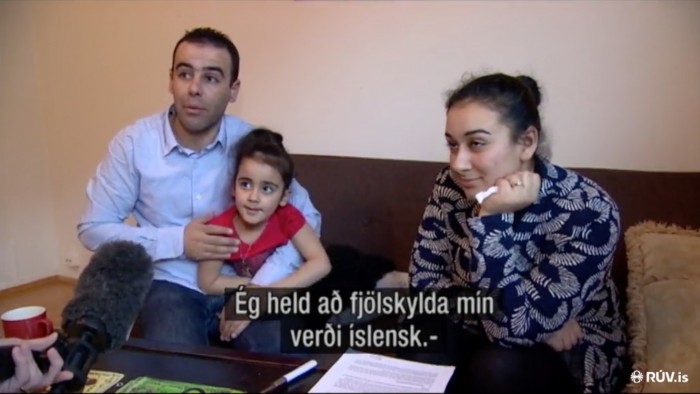 A Syrian family was granted a residence permit on humanitarian grounds this week for one year. They hope for a future in Iceland, and are expecting their third child to be born as an Icelander according to a report by Alma Ómarsdóttir from the National Broadcasting Service.

The couple Wael and Feryal came to Iceland with their two young daughters in July last year after having been stuck in Greece for a year. The Directory of Immigration had previously denied the family a hearing on the grounds that they already had residency in Greece, a decision harshly criticized, with five thousand people in Iceland signing a petition on behalf of the family and their case debated in parliament.

This week the couple finally received the good news, they were granted temporary residence permit for a year. In Greece nothing but the streets awaited the family, no healthcare or school for their children according to Wael. He can’t see himself returning with his family to Syria either, he wants to bring his children up in Iceland, “We are safe here, there is no saying how the war in Syria will end, here the girls can educate themselves and have a good life. I think my family will become Icelandic”

The two little girls, Jana and Jouli are in kindergarten and are already speaking Icelandic quite well, their parents have also started to learn the language. Feryal says it’s not that hard to learn Icelandic, she and the children already have some good friends in the community. They still haven’t received a social security number and are not allowed to work. Wael looks forward to starting work and he is optimistic for the residence permit to be prolonged. “When my wife and I start working we will reapply for the permit” But Feryal has another pressing task at hand, she’s expecting a newcomer in the family, the first Icelandic Syrian to be born here.