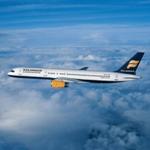 In addition to this new London Gatwick service, Icelandair will continue to fly twice a day from London Heathrow.

Birkir Holm Gudnason, CEO of Icelandair, explained, “Heathrow is our main airport in London and will remain so. However, due to its popularity with international flights it is impossible at the moment for us to get additional flight allocations. In response to increasing demand, we decided to start a flight at Gatwick. Gatwick will also give us the option of further growth in London and provide a link to our many partners with connecting flights to destinations throughout Europe and more remote destinations in Asia.”

Guy Stephenson, Gatwick Airport’s Chief Commercial Officer, commented, “We are very excited to be welcoming Icelandair to Gatwick and to be given the opportunity to support them and their plans for growth in London.  For passengers living in London and the South East, this move will give them greater choices over how to reach this wonderful country and join connecting flights to key cities across North America.

The timing of the flight on Thursdays and Sundays is intentional in order to provide the optimal dates for weekend trips.  Hjorvar Saeberg Hognason, Icelandair’s General Manager – UK said “These additional flights will be a great option for our UK customers. Over the past few years we have seen a surge in demand for winter travel to Iceland due to the popularity of the Northern Lights and events like Iceland Airwaves.  The fact that we have scheduled them on the two most popular travel dates of the week make them ideal for winter weekend city breaks.”

Icelandair’s flight schedule for the year 2012 is the largest in its history and approximately 14% larger than last year. In addition to London Gatwick, this year Icelandair has added a new year-round destination, Denver, Colorado.  London Gatwick passengers will be able to connect onwards to Denver as well as other popular North American destinations like Boston, New York and Seattle.

Icelandair is one of Iceland’s longest established companies, connecting the world and Iceland for 75 years.  Icelandair flies from the UK to Iceland with connecting service to Boston, Denver, Minneapolis/St. Paul, New York City, Orlando, Seattle, Washington, DC, Halifax and Toronto.

Visit www.icelandair.co.uk for more information on flights and packages.