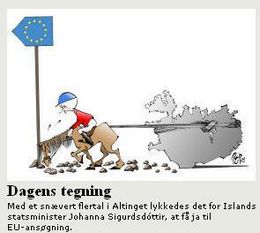 The membership application for Iceland to join the European Union has caught the attention of many around the world; especially neighboring nations such as Denmark. Mixed opinions formulate all over the European Union as well as in Iceland about Iceland’s membership application. Today, in Danish newspaper Jyllands-Posten, a political cartoon was made illustrating Iceland’s recent news about intentions about joining the EU.

The energetic demeanour of Icelandic Prime Minister Johanna Sigurdardottir in regards to membership in the EU was drawn today in the political cartoons in Jullands-Posten. The cartoon might also illustrate how most of the country does not want to join the EU but Johanna is still pulling and dragging the country to join.