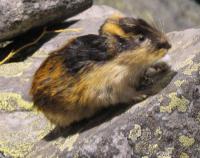 In one of the first compelling examples of the impact global warming will have on nature and wildlife, Norway’s lemming population appears to be on the verge of a major population decline. Lemmings throughout Scandinavia have traditionally undergone natural population explosions every three to five years, causing hundreds of thousands of the animals to flood the land in search of food.

But these reliable booms have become a rarity in most regions of Scandinavia, and climate change appears to be to blame. Norwegians used to get snowploughs out to clear their roads of the crushed lemmings during population bursts, but National Geographic News reports that southern Norway hasn’t seen a boom since 1994.

Scientists are closely studying the lemming and its response to increasingly warm winter temperatures. Lemmings spend the winters underground in tunnels, eating moss and receiving air as snow gradually melts. But recent years have seen erratic winter weather where the temperatures jump between freezing and thawing. This floods the Lemming’s tunnels with water, and then freezes them into ice.

“[The scientists] findings present a convincing demonstration of the effects of climate change on lemmings and their wider ecosystem,” said Tim Coulson, a population biologist from Imperial College London. Although the change in climate may not push the lemming to extinction, it’s increasingly unlikely the incredibly dramatic population explosions of the past will reoccur soon.