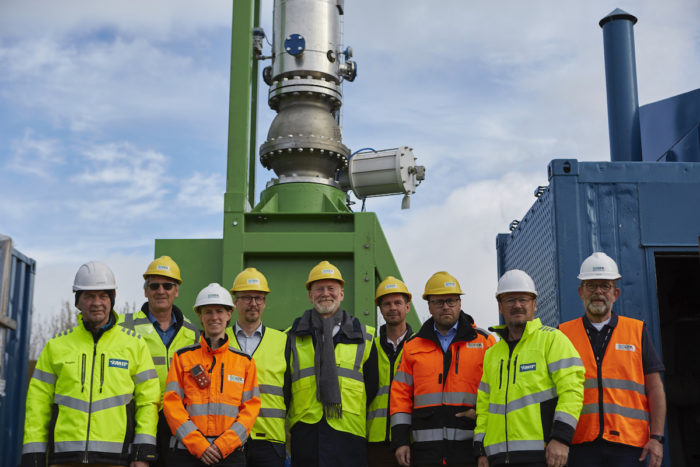 New equipment is in the works at Ýmir Technologies capable of disposing of organic waste in a more efficient and sustainable way than before.

Recently Ýmir and Sorpa signed a development agreement to further new ways of recycling waste. One of the aims of this new equipment is to reduce the need to transport waste long distances for recycling.

“This is an exciting and important experiment in new equipment here in Iceland. We at SORPA want to encourage innovation in the field of recycling, and with this experiment we are working with challenge of composite waste, which is often difficult to recycle in an efficient way. This experiment aims to extract important bio-waste, which is an important resource and recyclable material, from mixed waste. We hope that the project can solve the various problems we are facing,” says Jón Viggó Gunnarsson, CEO of Sorpa.

Painted, glued and/or plastic-coated timber is a difficult-to-treat waste that, for example, cheap mass-produced furniture eventually turns into. Such material falls into the category of the most difficult waste that processing plants such as Sorpa face when it comes to avoiding sending waste to landfills. ÝMIR is developing technology to handle such waste through pre-treatment and thereby provide useful microorganisms with the ability to break the material down into valuable components ??such as biogas or industrial alcohol.

Last year, Sorpa entered into a cooperation agreement with Ýmir to start a detailed study of the feasibility of processing waste in this way. The first phase is now complete with the construction and installation of technical equipment. The next phase involves an experimental processing plant for dry waste streams that will be operated at Sorpa’s site in Álfsnes for a few months.

Another example of a problematic waste category that that needs to be addressed is one that is a problem all over the world–disposable moisture-proof hygiene products, also known as nappies or disposable diapers. The equipment used to handle them has sometimes been called the “diaper ban”. The diaper mountain ranges of the world are extensive with about 10,000 tonnes a year being produced in the Reykjavík area alone. They don’t disappear just because they’ve been covered with soil, but break down and produce gasses such as methane, which are many times more harmful than carbon dioxide.

Ýmir Technologies is known for designing and building machine sets for waste pre-processing to facilitate recycling. Their methods of dealing with the diaper problem involve subjecting the waste to pressure, steam and heat. By abruptly relieving the pressure once the steam has penetrated the organic elements of the material, the thermosetting portion of the material breaks down into much smaller molecules such as starch and sugars that are easily converted into valuable raw material through organic processing.

The market is primed for this kind technical equipment

“We are investing in the development and production of machines that can be used by waste disposal companies around the world to help them achieve greater success in recycling as well as increase the number of recycling centers worldwide. We aim to become to organic recycling what Marel managed to become as a primary food processor: a world leader in its field. The possibilities are endless, as there is a great awakening in the world in regard to how to make better use of organic material and reduce waste,” says Sigurður Ingólfsson, CEO of Ýmir Technologies about the project and the company.

“It is a great advantage, given our situation in this country, that Sorpa has high ambitions to pave the way for the circular economy, not least in terms of a smaller regional association. We therefore have the opportunity to take the initiative in developing methods that are suitable on a smaller scale due to our collaboration with Sorpa. Disposal of waste is, by its nature, an issue that primarily concerns the local environment. In most municipalities in the world there are stations such as Sorpa, many of which are of a similar size, although these municipalities belong to larger nation states. Despite this, in many areas there does not seem to be much emphasis on developing equipment suitable for these stations. In Europe alone, there are 2,000 such stations, so the group of buyers for our technical equipment has the potential to be quite large,” says Sigurður.

In addition he believes that many industrial companies could be more successful and improve their environmental footprint by recycling their main waste themselves.

“This applies to salmon farming, for example, where there is often a large amount of dead salmon that is not used for feed production. Such companies could use the salmon oil to replace fossil fuels on the many ships they operate. Another example could be so-called pink slime, which is a high-fat waste from industrial degreasing. It is now disposed of with a horrible environmental footprint instead of cleaning the slime and reusing it along with the oil that remains in it, e.g. for biodiesel production. Our collaboration with Sorpa is invaluable and will most likely not only serve the needs of Sorpa and the local community here at home, but help the whole world in tackling this challenge that involves recycling difficult bio-waste,” says Sigurður.

After many years of research and technological development, these products will to come to market

“This spring, we are starting the construction of a biodiesel plant to process fuel for the consumer market from high-fat slaughter waste recycling, but before that we had developed the pre-processing part that creates the fat raw material from the waste. This was done in a similar collaboration with SORPA, as mentioned before. With the advent of this equipment, the slaughter waste will largely be converted into sustainable biodiesel fuel. ÝMIR’s production technology is new and can, within a few years, revolutionize this industry around the world if it succeeds. Harmful landfilling of this waste can be a thing of the past with this project. As far as the nappy ban is concerned, we expect that the results of our research project in collaboration with SORPA will be of such a nature that in 2-3 years the equipment will be ready for sale. If it works out, there is hope for a great demand for that technology all over the world,” Sigurður concludes.