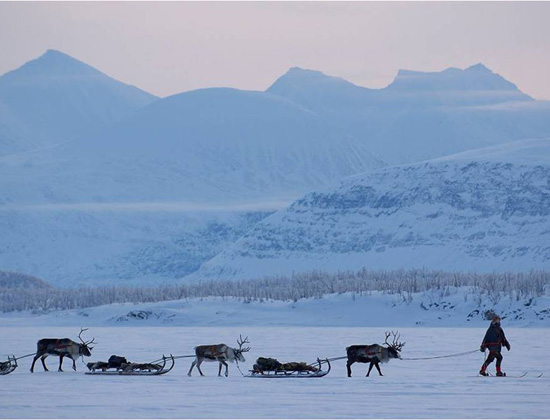 Up to a dozen bridges are set to be built in the north of Sweden, allowing for the safe travel of reindeers searching further afield for food due to the effects of global warming.

The bridges, named ‘renoducts’, will cross railway lines and major roads in Norrbotten and Västerbotten, with construction set later in 2021. Tobias Jonsson, a local reindeer herder, told the Swedish public broadcaster Sveriges Radio, “I’m looking forward to us being able to cross undisturbed.” It was also announced that a group of herders were consulted on the bridges’ design and locations.

Due to the warmer and wetter winters, lichen, a crucial part of the reindeer diet, has struggled to grow. As a result, reindeer have been forced to search further afield for food, crossing treacherous paths across railway lines or major roads, where they are at risk of being hit by passing vehicles.

Per Sandström, a landscape ecologist at the Swedish university of agricultural sciences, told Sveriges Radio, “In a changing climate with difficult snow conditions, it will be extra important to be able to find and access alternative pastures.”