A racoon was found in a hole in the ground near Hafnir in Reykjanes Peninsula yesterday. This is reported by ruv.is 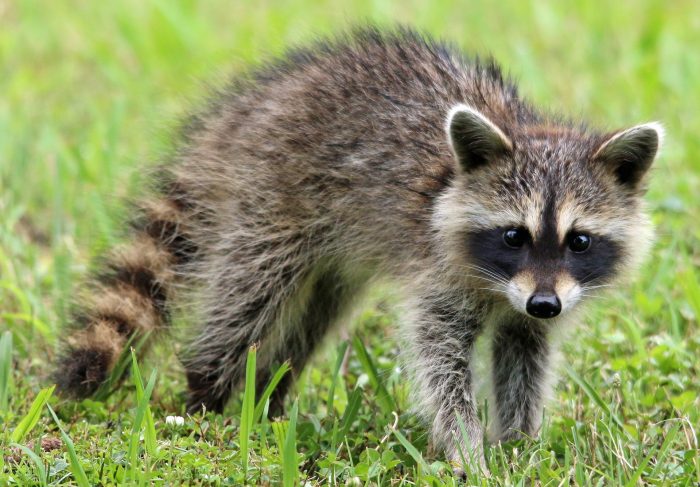 Not the captured racoon.

Birgir Hauksson and his dog were out walking when the dog found the animal. “The dog found it. We were looking for clams, but since my dog has not got a special interest in them he just roamed around. I thought he had found a mink as he has done before but the sound that came from the animal was different, so I went to have a look,” he said.

“I thought it was a cat for a bit, but it turned out to be a racoon.”

This is the first racoon Birgir has captured in Iceland. The animal is not common in the country, but this is not the first time they are seen here. Three racoons were imported to the Sea Life Museum in Hafnarfjörður in 1976. One of them escaped but was captured shortly after that.

“On our last trip, we found an ancient walrus tusk. It did not cause such a fuss like this finding,” Birgir said.

The animal ecologist Kristinn Haukur Skarphéðinsson says that racoons were imported for their furs between 1930 and 1950. And apart from the three animals sent to the Sea Life Museum, only one other racoon has been found in Iceland, but it had smuggled itself in a hot tub container.

“This racoon was either smuggled to Iceland or came in a container. Hafnir is not far from the harbour and airport,” Kristinn said and added: “Racoons are not dangerous. They are predatory animals and defend themselves if they are cornered, but they are usually fairly docile and happy animals.”

They have been known to carry rabies, which is an unknown disease in Iceland. However, this racoon will be examined to see if it had been infected. According to laws on wild animals, racoons are protected, but there are also laws on importation of animals which say that exotic animals should be killed immediately and burnt. Kristinn, however, says it is important to examine this specimen.

“It is not common that animals like this one come to Iceland and we should, of course, examine it, for science,” Kristinn said.