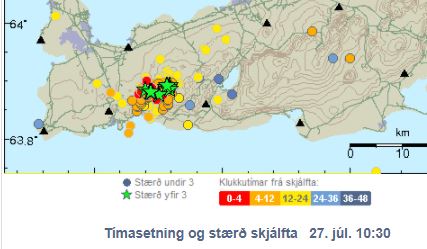 An earthquake swarm started yesterday on the Reykjanes Peninsula, close to Fagradalsfjall mountain. It has quieted down a bit since last night and it’s impossible to say if it might ramp up again or stay quiet.

The swarm has many smaller earthquakes and a few larger than 3.0. The biggest earthquake in the swarm was a 4.1 on the Richter scale. People from all over the South-West corner of Iceland reported feeling it clearly, all the way up to Borgarnes in West Iceland.

No warnings have been issued but scientists are keeping a close eye on the area.

Image from: The Icelandic Met office