Today is the last day of the annual Secret Solstice Music Festival in Iceland. The opening ceremony to the festival took place on 16 June and went well although not totally without controversy. Around 8.000 people danced to the tunes of Chaka Khan for the opening act and peacefully enjoyed themselves. Young and old also enjoyed the National Day yesterday without incident albeit with some controversy.

The controversy revolves around the armed policemen seen patrolling the festivities – Icelanders aren’t accustomed to armed police watching citizens. Armed police are to guard all mass gatherings in Iceland this summer according to a decision made by the relatively new National Security Assembly, formalized in September last year. 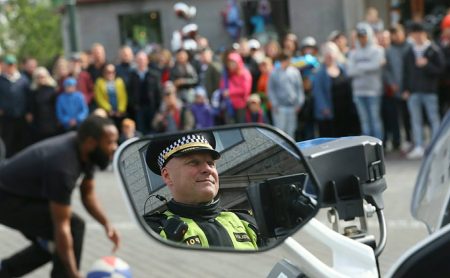 RUV quoted police chief Haraldur Johannessen who clarified that there was no increase in armed police in the country, the decision was taken to make the already armed police and special forces more visible during large gatherings and festivities.

Icelanders have reacted promptly and protested via social media and newspapers, citing that police presence is already too prominent and that children’s gatherings and weapons pose danger rather than protection.

Johannessen went on to explain that the decision was made to guard all gatherings this summer, it was a temporary response in the wake of recent attacks in neighboring countries, particularly the events in London where it took police 8 seconds to overpower the assailants, according to Johannessen, and where “each second counts” he added.
(Images are from the Reykjavik Police Facebook)