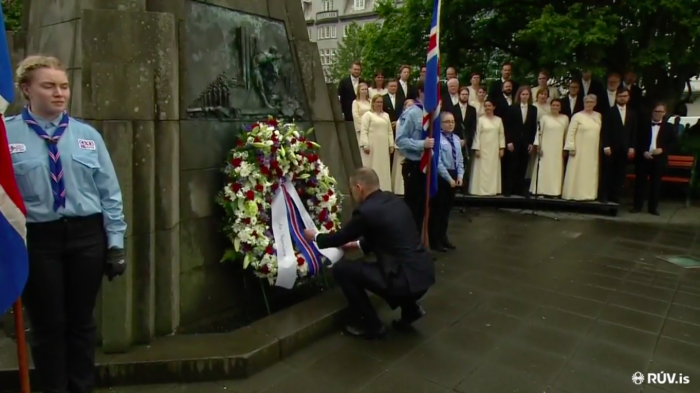 The Icelandic National Day is today, 17 June, celebrating the foundation of The Republic of Iceland on 17 June 1944 and its independence from Danish rule.

All around the country Icelanders celebrate today on this cloudy, but mostly dry day, with concerts and festivities for the young and the old. In Austurvollur, the park in front of the parliament, President Guðni Th. Jóhannesson launched the celebration this morning as tradition dictates, by laying flowers at the pedestal of the statue Jon Sigurdsson, this is the first time he does that in his presidency, as he took office in August last year.

The date of the National Day was chosen to coincide with the birthday of Jon Sigurdsson, an important player in the event leading up to the independence, who took lead in reform in Icelandic culture and was the leader of the 19th century Icelandic independence movement. The formation of the republic was based on a clause in the 1918 Act of Union with Denmark, which allowed for a revision in 1943, as well as the results of the 1944 referendum. Although saddened by the results of the, King Christian X of Denmark, sent a letter on 17 June 1944 congratulating Icelanders on forming a Republic.

Abolishing the monarchy resulted in little change to the Icelandic constitution; “The King” was merely substituted for “The President”. However the people of Iceland celebrated the end of the long struggle for total independence and praised Jon Sigurdsson for his early independence movement and Sveinn Bjornsson, who became the first president of Iceland.