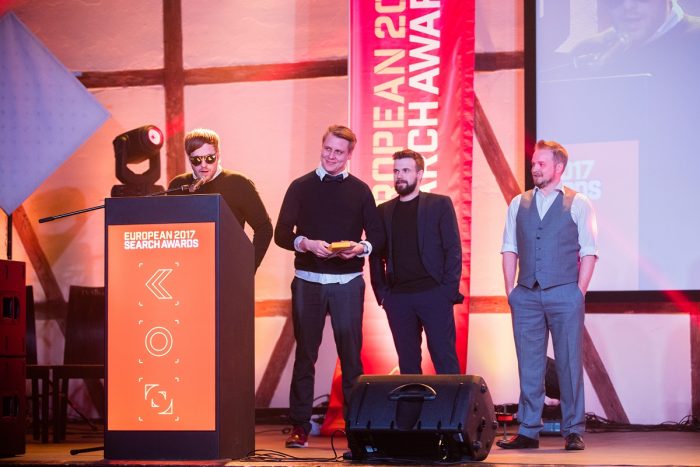 The Engine launched a powerful ad campaign in the UK featuring Icelandic Skyr products from MS Iceland Dairies, or Mjólkursamsalan, as they’re called in Icelandic. The campaign was a huge success and won “Best local campaign”, which is kind of a big deal in this competition. The judges felt that the campaign was powerful and highly successful in introducing the Icelandic product to the UK market.

Guðbjörn (Beggi) Dan Gunnarsson, The Engine’s managing director was ecstatic. “I have to admit, it was daunting seeing our name up on the nominee list with some of the biggest and best online marking companies in the world. We were nominated for both “Best use of social media” and “Best local campaign” and had our fingers crossed. Needless to say, we were absolutely thrilled when our name was called.”

The ceremony was held in Krakow, Poland, and Beggi Dan went there with his team. “Receiving this award is such a huge encouragement for everyone at The Engine. We’re privileged to get to work with Icelandic and international brands on online marketing and this tells us we’re on the right path. Working with Iceland Dairies was great and we’re very happy with the result,” Beggi Dan says.

Iceland’s Business newspaper reports that according to Guðný Steinarsdóttir, Iceland Dairies’ chief of marketing, the awards are a confirmation of how good content and good planning can help increase consumer awareness for Icelandic Skyr in foreign markets.

The Skyr campaign has even gotten attention beyond the European search awards. “Google asked us permission to turn the campaign into a case study,” Beggi Dan says. “They wanted to demonstrate that small businesses can be very successful in using Google AdWords to promote their products and services. They felt that the Skyr campaign is a great example of that, and I agree.”