An earthquake of 3,5 on the Richter scale shook Katla caldera under the Myrdalsjokull icecap at 07:09 am this morning. The origin of the tremor was to the west in the caldera according the Icelandic Met Office. This autumn saw a string of frequent tremors and quakes in and around Katla volcano and a state of uncertainty was declared in September with the emergency level at a yellow alert. The Volcano then went relatively quiet until now. The tremors now are nothing like the ones in September and there are no signs of volcanic activity according to Gunnar P. Gudmundsson at the Icelandic Met office. “there have been a few tremors be fore and after the big one this morning, but those were considerably smaller, there has been a lively tremor accticity the whole autumn but now sign of volcanic unrest or activity so far” Gudmundsson told Visir’s reporter. 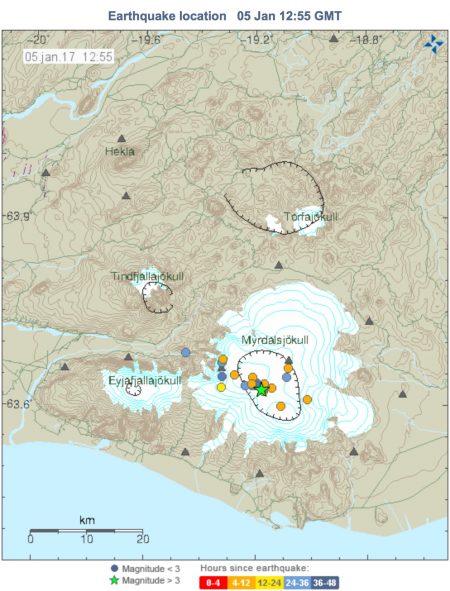 Image is taken from the Icelandic Met Office website vedur.is

Katla is one of the largest volcanoes in Iceland, situated to the north of Vík í Mýrdal and to the east of the smaller glacier Eyjafjallajökull who’s underlying volcano famously erupted in 2011 bringing air traffic in Europe to a halt. Eyjafjallajokull has been known to erupt one to two years prior to Katla in the past. Katla’s peak reaches 1,512 metres and is partially covered by the Mýrdalsjökull glacier. The system of magma chambers has an area of 595 km2 (230 sq mi) and the Eldgjá canyon is part of the same volcanic system as Eyjafjallajökull.