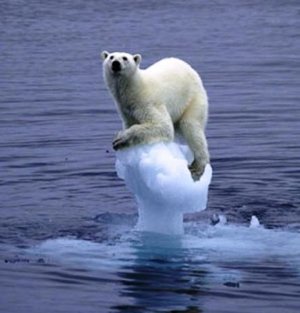 The female polar bear slain this week in Iceland has been the cause of much discourse about the correct procedure when these greatly troubled animals wander to the island. This last female was a healthy average size juvenile bear, about 207 cm long and 204 kilos, she was in good shape physically although one of her fangs was broken. She was lactating, indicating that she had given birth and cubs must have been with her not too long ago. It’s hard to say if the cubs were still with her, there have been no sightings of them. It might be that they had gotten separated on the journey, that the cubes gave up swimming, or she might have already weaned them of her milk, if they had reached three to four years of age, in any case its hard to predict the fate of the cups, RUV reports.

An ever increasing amount of polar bears have wandered ashore in Iceland in recent years, and some debate has been going on how to receive them. The protocol is currently to shoot them if they get close to human habitat and livestock, which they always do, so they are shot with out exception. Eight years ago a group of eight people appointed by the ministry of the environment sought advise from authorities in Greenland regarding the best course of action in these cases. Greenland´s authorities were disinterested in the inquiry and they didn’t want to receive the animals back, according to the representative from the Icelandic Institute of Natural History.

When two polar bears came ashore in Iceland in a row in 2008 the ministry of environment appointed the group of experts to do come up with an official respond plan. Their findings were that the best course of action would be to slay the animals. The total size of the polar bear population has not changed drastically in recent years but there is clearly cause to worry about them due to global warming and climate change. Polar bears are always a threat to livestock and humans when they come ashore in Iceland but for the species as a whole it would not make much of a difference to slay the ones that wonder to the island according to the groups findings. An annual hunting quota is issued for the species to keep them in check and the cost of rescuing them and shipping them back to Greenland would amount to millions of IKR and was thusly deemed not worth it.

Polar bears are facing a crisis in their environment doe to climate change and changes in their habitat. The ice, vital to their way of life, is melting. The numbers of polar bear population has not yet drastically changed, but there is clearly cause to worry about the polar bear population, Guðmundur A. Guðmundsson animal ecologist at the Icelandic Institute of Natural History informs. He estimates that approximately 20 thousand polar bears currently exist.

The appointed group of experts examined the possibility to anesthetize and relocate animals that wander to Iceland but willingness of authorities in Greenland to receive them, or lack thereof, was a major factor in in abandoning the idea. Guðmundsson further informs that polar bears that wander to Svalbard are always shot, they are impulsive and unpredictable, they are having trouble finding food and are perhaps desperate. According to him its hard to say for sure the reason so many animals have wondered to Iceland in the past decade, more than the decade before, it might be because of global warming but it might also simply be a coincident.