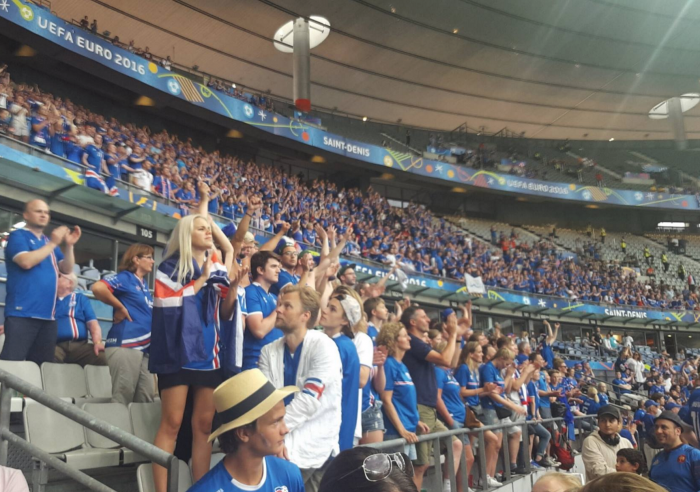 Iceland will be competing against England in the 16 finals at the European championships this evening. The game marks a monumental step in the sport of football for the Icelandic underdogs. Icelanders have been slowly gathering in Nice, France for the last few days and last night they came face to face with the English supporters which had taking over the small city with throughout the night which overwhelmed the Icelandic supporters. The reason for the high ratio of English supporters to Icelandic is in part because Iceland simply didn’t believe they would advance to the 16 finals, so only a handful of supporters had purchased tickets for the 16 finals. The rest had to purchase their tickets through the UEFA ticket portal, which offered first come first serve purchase.

This resulted in only 3000 or so Icelanders securing tickets to see their national team compete against England, while the english supporters acquired thr majority of the tickets, which were close to 30000. The fact that the English supporters will be 10 to 1 in the stadium has not daunted the Icelandic supporters or so one Icelandic fan said

Sure, we’re outnumbered 10 to 1, but we will have the support of Icelandic super fans, which will bring all the bells and whistles with them, which I’m sure will break through the English chants.

The Icelandic super fans “tolfan” as they are called, had been following the National team to every game in throughout the competition but ran out of money after the last game. Fans were worried that for the English match, there would be none to coordinate the chants and songs as have been so prominent with the Icelandic supporters throughout this competition, but a last minute decision by KSI (national football association of Iceland) brought about hope when they decided to sponsor 10 of the “tolfan” members to go and assist the Icelandic supporters against the English. So as soon as the super fans had landed in Nice late last night, began the competition between English and Icelandic fans, chanting their team names into the night.

The police were on high alert, and although noises were loud and trashcans tumbled, the Icelandic and English supporters showed mutual respect and were quite frankly just excited for tomorrow’s match.

Assorted musings:
Some English fans seem to think this will be an easy match, while others are quite nervous. Let’s not forget that Iceland is the underdog in this match and has nothing to lose, while England has everything to lose.
A lot of Icelanders bought tickets without getting flights to nice while others got flights but no tickets. Neither was willing to budge, but it seems by now tickets are becoming more available than before, and the initial price bubble is coming down

Newer PostFootball: Thank you world for supporting Iceland
Older PostThousands of people expected to watch the game between Iceland and England live in Reykjavik