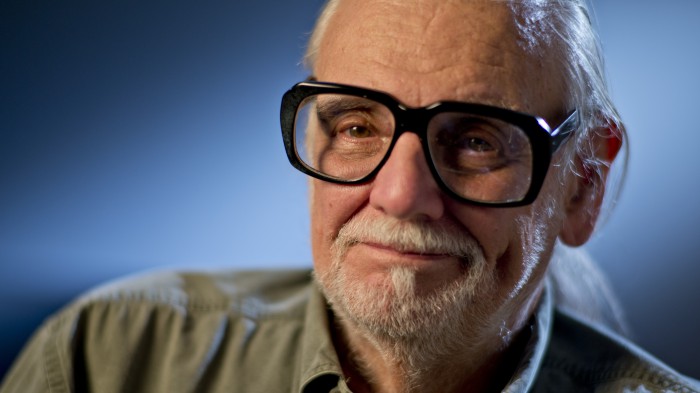 The American director and screenwriter, George Andrew Romero, master of gruesome horror films, is confirmed to be the guest of honor of the Lucca Film Festival e Europa Cinema 2016, taking place from the 3rd to the 10th of April in the Tuscan cities of Lucca and Viareggio.

A complete film retrospective and a major exhibition premiering in Italy will be dedicated to the Director of horror cult movies such as Night of the Living Dead, Dawn of the Dead and The Crazies. “I am really looking forward to meeting my fans in Lucca and Viareggio. In the meanwhile . . . . Stay Scared!” stated Maestro Romero.

Having paid tribute to David Lynch in 2014 and to David Cronenberg in 2015, this year the Film Festival dedicates one of its main sections to Maestro George Romero with the tribute to the Master of Horror curated by Paolo Zelati and Stefano Giorgi. George Romero will in Lucca to take part in screenings, public events, conferences and the exhibition dedicated to his works. On April 7, Romero will attend a press conference, on April 8, in the evening, he will receive a Lifetime Achievement Award and will present “Dawn of the Dead ”. On that same day, Romero will leave his footprints on the new Lucca Comics & Games “Walk of Fame”, dedicated not only to the great names of the cartoon and comics world, but also the main personalities of fantastic collective imaginary.

In the morning of Saturday 9 April, Romero will hold a Masterclass and on the evening of April 10, he will close the festival in Viareggio after presenting the movie Creepshow. During his stay, Romero will visit the exhibition at the Palazzo Ducale in Lucca (26 March-1 May 2016) showcasing, for the first time in Italy, 40 items linked to his works including flyers, playbills and Italian original posters in clear chronological order. In the first rooms, visitors can admire posters and playbills of the trilogy of the Dead (Night of the Living Dead 1968; Dawn of the Dead of 1978 and Day of the Dead in 1985).

The exhibition continues with the exhibition of large posters (two meters by one meter forty) for the films Creepshow of 1982, The Crazies in 1973 and many more. The tribute to “New American Horror” fathered by Romero closes with a series of original posters autographed by the greatest of the industry like Wes Craven, H.G. Lewis and Bran Yuzna. The peculiarity of the posters, flyers and playbills is that they are actual illustrations sketched by the most famous designers of the time. The pieces come from the private collection of film critic and collector Paolo Zelati. The exhibition is part of a wider project with strong musical connotations project with strong musical connotations present at the Palazzo Ducale on the same dates.

The project stems from the collaboration with the Association of Composers “Cluster” and the School of Symphony Music of Lucca. Ever since his first feature film Night of the Living Dead – which was produced on a string with a budget of only $10,000 – Romero has become an iconic figure in the history of horror films, as well as being considered the father of “zombie movies”.

The Lucca Film Festival and Europa Cinema directed by Nicola Borrelli, is one of the key events organized and sponsored by the Fondazione Cassa di Risparmio di Lucca. The exhibits are organized in collaboration with the Comitato Nuovi Eventi per Lucca in collaboration with the Festival and with the support of Banca Société Générale. The Festival also enjoys the support of Gesam Gas & Luce SpA, Banca Pictet, Banca Generali Private Banking, Banca Carismi, the Fondazione Banca del Monte di Lucca, Stonecycle, Il Ciocco S.p.A., Il Ciocco International Travel Service S.r.l., Idrotherm 2000, MiBACT (the Italian Ministry of Cultural Heritage, Activities and Tourism), the Region of Tuscany, the City of Lucca, the City of Viareggio, with the collaboration of the Province of Lucca, the Fondazione Sistema Toscana, the Fondazione Giacomo Puccini and Puccini Museum – Casa Natale, the Fondazione Centro Arti Visive, CG Entertainment and the Photolux Festival. Thanks are also due to Lucca Comics & Games, Trenitalia Regional Management , Unicoop Firenze for their collaboration and to the Degree Course in Performing Arts and Civilization Department of Communication and Forms of Knowledge at the University of Pisa.

The Lucca Film Festival and Europa Cinema is an annual event that celebrates cinematic culture. The Festival is able to engage an ever-growing public through screenings, exhibitions, conferences and performances, which range from mainstream to experimental cinema. Throughout its history, the Festival has excelled thanks to its ambitious and well-researched programming. The Festival has paid tribute to celebrated figures in the cinema world while at the same time rediscovering other notable names and identifying up-and-coming talents. The beautiful cities of Lucca and Viareggio contribute to the Festival’s appeal, serving as the backdrop to an event that has become a much awaited and not-to-be-missed happening in Italy and Europe.