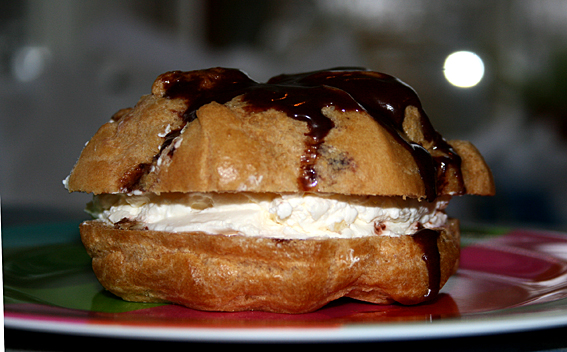 Bolludagur, Bun Day is today, Monday with many Icelanders gathering around the coffee table at home with family or at work with colleagues after making a head start yesterday with freshly home made buns. This day marks the start of a peculiar series of three festive days this week, a carnival week of sorts. Bolludagur (Bun day), Sprengidagur (Explosion day) and Öskudagur (Ash Wednesday).

On Bolludagur, children are prepared, they make paper wands at school with which they should lightly spank parents and grandparents and repeat, Bolla! Bolla! For each spank they should receive a bun, a kind of homemade Cream Puff. The most common bun is water-doe bun, filled with whipped cream and jam topped with chocolate icing. There are many variations, but the casual homemade bun is the most common (and the most delicious). Bolludagur doesn’t always turn up on the same date; it should be on the Monday, counting seven weeks before the Easter.

Bolludagur is followed by Sprengidagur, second in the series, it turns up on Tuesday. It is the day when families should gather and eat an all-you-can-eat portion of salt-cured meat or salted meat in yellow lentil soup with potatoes and the beloved rutabaga turnip. Literally called explosion day, you should eat until you burst. The day is in preparation for the long fast until Easter, a tradition dating back to catholic times in Iceland, in fact the whole series of days have some catholic roots, Ash Wednesday being the most internationally known, but they have each been adopted and slightly changed trough time and with local traditions.

Ash Wednesday completes the series with festivities for children, its the most carnival like day, with a kind of Pinjata tradition especially in the north of Iceland, but all around the country children dress up and sing songs for treats. Not so long ago youngsters made little textile bags, called Ash bags and would secretly try to pin them on the back of an unsuspecting friend or strangers, but this charming tradition seems to be disappearing.