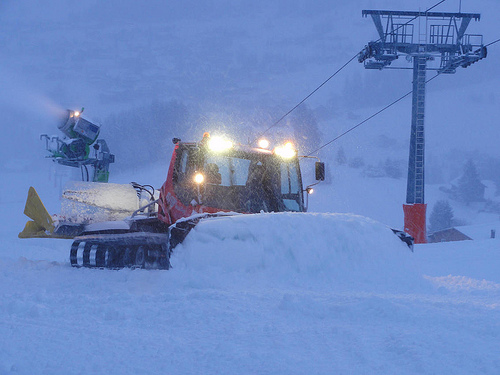 UPDATE: An avalanche did fall on the village of Patreksfjörður, brushing by the evacuated homes, 40 meters west of the evacuated area. No one was harmed. The snow is still causing havoc, with some towns completely snowed in in the west and the east fjords.

There are warnings high danger (level 4 of 5) of avalanches is in mountain areas in northern part of Westfjords and considerable (level 3 of 5) danger in mountain areas in Tröllaskagi peninsula in North Iceland & in the Eastfjords. Six homes were evacuated last night in the village of Patreksfjörd due to avalanche risk.

The storm still keeps the vigilant rescue teams in Iceland busy at them moment, The ring road, national road 1, and roads in general are blocked in several places with the Icelandic Road and Coastal Administration keeping updated information about their condition around the island. Snowstorms in north Iceland are particularly bad at the moment, in Víðihlíð, close to Blöndós a temporary rescue centre has ben set up due to number of cars stuck and people in need of assistance. Needless to say public transport around the island is severely disrupted, however the capital is seeing the storm subdue and calmer weather at the moment