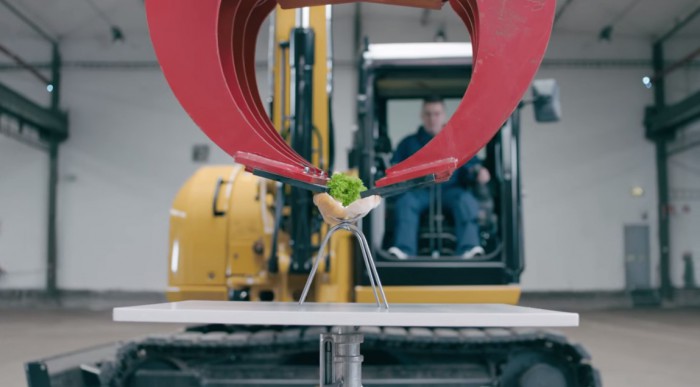 Finnish excavator operator Juha-Pekka Peramaki is a man with an extraordinary talent – he can put together Lego blocks using the claws of his Hitachi ZX210. In an amazing video that went viral on YouTube some months back, Peramaki is seen picking up tiny pieces of Lego with his 8.5-tonne excavator without crushing them before lowering them carefully into place.

What’s more, the 32-year-old is also adept at making and delivering a hot dog directly to the mouth of his friend without spilling a thing. In a recent video (see below) he can be seen picking up a bun with his excavator, then placing a sausage and some sauce inside it before transporting it over to his waiting friend, Antti Kirvela, who is stood open-mouthed.

Peramaki began working with excavators when he was just 15 years old, and started practicing precision work in 2004. These days, as seen by the footage of him in the machine, he is regarded as an expert in his field.

The excavator he uses to put the Lego blocks in place is more commonly used for digging up terrain or moving heavy construction materials, but Peramaki’s truly astounding feat shows that they can be used for the light work too.

The Finn, who incredibly managed to succeed in his first attempt and proceeded to only fail once in 30, noted that every young boy wanted to be a firefighter, blow things up or operate an excavator.

SMFB, which came up with the hotdog idea in cooperation with Statoil, said that all the hardworking people who want a snack on their way to work deserve a real treat, which was the reason behind the hotdog masterpiece.