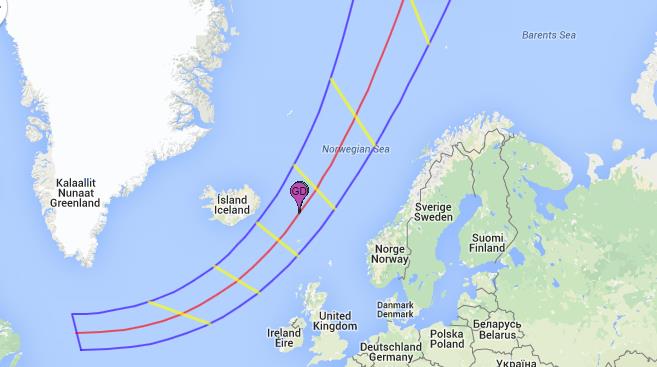 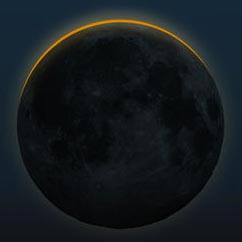 The eclipse of March 20, 2015 is a Total Solar Eclipse. Totality occurs in a narrow path across Earth’s surface, which lies only 70 km east from Iceland’s Southeast coast. The longest duration of totality will be 2 minutes 47 seconds off the coast of the Faroe Islands.

In Reykjavik, the moon will cover 97,5% if the Sun’s surface while in the Eastern parts of Iceland it will be 99,4%. It is the last total solar eclipse visible in Europe until the eclipse of August 12, 2026.

At the end of its path, the shadow of the Moon rises from Earth’s surface to space at the north pole. As March 20 is the Northward equinox, the eclipse occurs as the Sun rises at the north pole for the first time in six months. 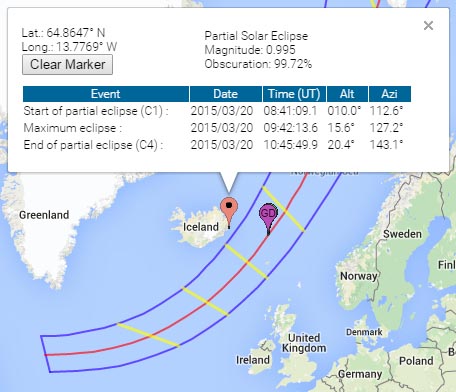 This screenshot from Google’s interactive map (http://eclipse.gsfc.nasa.gov/SEgoogle/SEgoogle2001/SE2015Mar20Tgoogle.html) shows the path of the Total Solar Eclipse of 2015 Mar 20 . The northern and southern path limits are blue and the central line is red. You MUST be somewhere within the central path (between the blue lines) to see the total phase of the eclipse. The eclipse is longest on the central line (red). The yellow lines crossing the path indicate the time and position of maximum eclipse at 10-minute intervals.