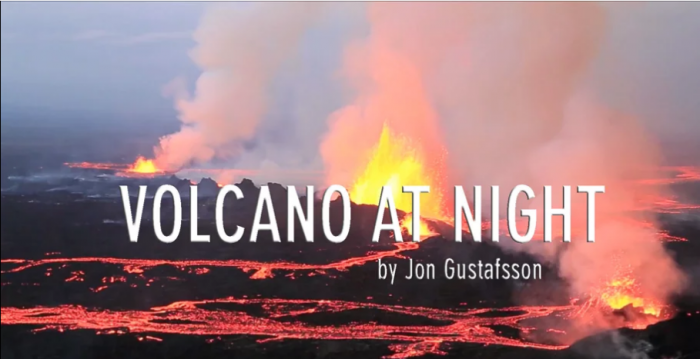 The new lava field continues to grow and has now crossed the track (in Flæður) leading into the Holuhraun area and  the subsidence of the Bardarbunga caldera continues with same rate as before. Seismic activity in Bardarbunga continues on similar rate as the last few days, there have been five earthquakes bigger then M3,0 were recorded since noon yesterday. The biggest one was M5,0 at 16:35 yesterday afternoon and smaller earthquakes were detected in north part of the dyke and around the eruption site. GPS measurements show continuing slow movements and no change has been detected in water monitoring that cannot be explained with changing weather.

Air quality:
• Yesterday a high concentration of SO2 was measured around lake Myvatn (2000 microgram pr. cubic meter) and last night in Reydarfjordur (2600 microgram pr. cubic meter). The Environmental Agency of Iceland is waiting for shipment of SO2 meters that will be put up around Iceland.
• Pollution from the eruption is mostly expected to move towards east and southeast today (Friday) and tomorrow. A map showing the gas forecast can be found on the web page of the Icelandic Met Office www.vedur.is/vedur/spar/textaspar/oskufok/ An interactive map showing the gas distribution can be seen at www.vedur.is/vedur/spar/gasdreifing
• The Icelandic Met Office has also opened a web page were people can report if they have detected gas pollution. A link to the page can be found on the Icelandic version of the web page under Skrá mengun.

• Three scenarios are considered most likely:
• The eruption on Holuhraun declines gradually and subsidence of the Bardarbunga caldera stops.
• Large-scale subsidence of the caldera occurs, prolonging or strengthening the eruption on Holuhraun. In this situation, it is likely that the eruptive fissure would lengthen southwards under Dyngjujokull, resulting in a jokulhlaup and an ash-producing eruption. It is also possible that eruptive fissures could develop in another location under the glacier.
• Large-scale subsidence of the caldera occurs, causing an eruption at the edge of the caldera. Such an eruption would melt large quantities of ice, leading to a major jokulhlaup, accompanied by ash fall.