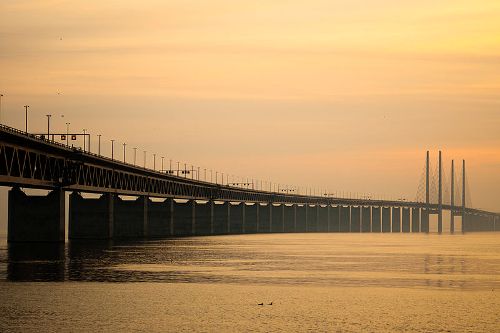 A Swedish construction company has proposed that a new metro line and a bike tunnel should built between the Öresund region and Copenhagen.

At present, cycling across the Öresund Bridge – the part-bridge, part-tunnel link between Malmö in southern Sweden and the Danish capital, Copenhagen – is illegal. However, Swedish construction firm Skanska and Swedish consultancy company Sweco have put together a proposal that would enable cyclists to cycle between the countries.

The new report proposed six connections across the waters between the Scandinavian neighbours, including tunnels between Helsingborg in Sweden and Helsingor in Denmark that could cut 40 minutes off the travel time between Helsingborg and Copenhagen; a high-speed link from Malmö to Copenhagen’s airport; and a metro connection between Malmö and Copenhagen. A new tunnel, called the super cycle path, above the road on the Öresund Bridge would be built for cyclists to go from country to country.

The companies’ joint report noted that the population of the Ostersund region is projected to increase by around one million people by 2070. It also said that to ensure the area was “internationally competitive”, half a million new homes should be built as well.

Skanska CEO Pierre Olofsson explained that their goal was to start talks between the public and non-profit business sectors on how they could realise the region’s full potential.