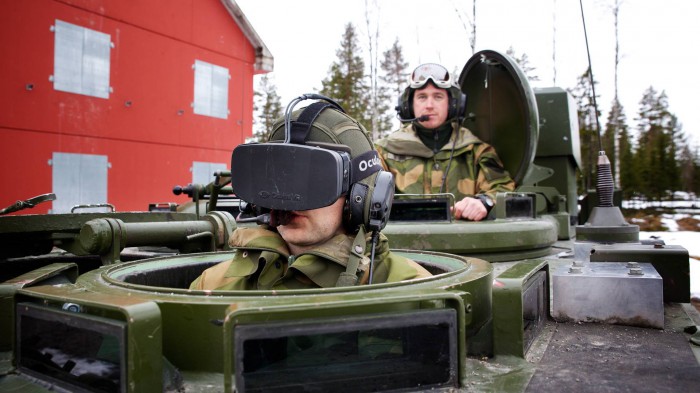 The Norwegian Army is to be utilising the Oculus Rift virtual reality headset system for combat operations using its armoured tanks.

As reported by Tujobs.com, the Oculus Rift system, titled Battlefield Management System, will allow the driver to navigate more independently according to the Commander‘s instructions, instead of having to get more detailed driving instructions and operate with large blind spots.

As part of the system, cameras are positioned around the tank, giving operators a 360 degree view from the driver‘s seat with the hatches up or battened down. The operator of the headset can see 360 degrees around the tank simply by moving their head up and down, and side-to-side.

The tank’s driver can “parallel park” the vehicle with precision of up to a centimetre by lowering his/her gaze and looking straight down to the belts of the tank.

TU (Teknisk Ukeblad) in Norway was allowed early access to try out a prototype of the headset and the specially developed camera system.

Major Ola Petter Odden from the Norwegian Army’s Combat Lab explained to TU that the concept is very promising. Odden stated that the headset doesn’t have the necessary screen resolution to see well at a distance and may cause some dizziness for the user. However, this should be improved quickly.