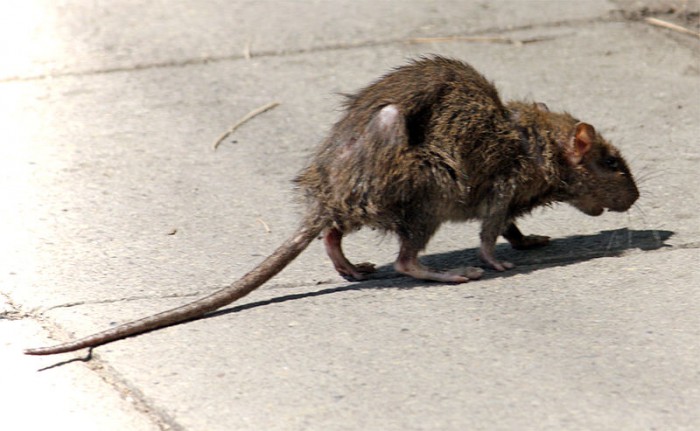 A Swedish woman got the shock of her life when she discovered what she thought was the sound of a scurrying mouse was actually a 40cm-long rat… and that’s without the tail being measured on.

The rodent, which Swedish media has dubbed Ratzilla, emerged from under the kitchen sink when Signe Bengtsson went on the hunt to see if she could locate what she then thought was a mouse. She said she instinctively jumped onto the kitchen table and let out a loud scream.

The family began to realise there was a problem when their cat stopped going in the kitchen of their apartment in the town of Solna, north of Stockholm. Several days later, Bengtsson was taking the rubbish out when she first spotted the enormous rat tucking into scraps and leftovers.

She explained that she was petrified when she saw it going through their rubbish bin, adding that she did not know it was possible rats could get so big.

Pest controllers later explained that the rat had managed to gnaw its way through the wood and cement to break into the apartment. The problems did not stop there, however, as the huge pest chewed through water pipes that ran to the dishwasher which resulted in the kitchen flooding.

Bengtsson’s husband Erik Korsas said that the rat became so domesticated and comfortable in the apartment that it would just sit under the kitchen table.

A few days after spotting it for the first time, the family stopped going in the kitchen and called the exterminator. Pest controllers arrived with three above-average traps in an effort to bring an end to the family’s nightmare. However, even after the rat was caught, it still had the power to escape, and ended up behind the dishwasher.

Korsas said that even after it eventually died, the children were scared it would come back to life as a “zombie rat”. Bengtsson added that no one, including the cat, wanted to be in the kitchen after the traumatic experience. The pest controllers also confirmed that it was the biggest rat they had ever seen.