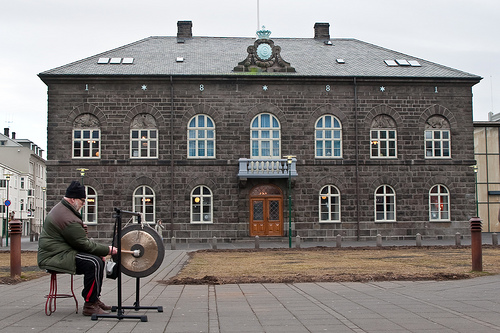 Angry Icelanders have continued their protests against the government going back on its campaign promise to allow citizens to vote on whether the country joins the EU.

Some 21 per cent (around 51,000 people) of the country’s voting population signed a petition in supporting a referendum on the North Atlantic island’s EU membership application. The protesters are unhappy with the coalition government’s decision to go back on a campaign promise that they would allow the people to vote on EU accession. The demonstrations have now entered their third week.

On Saturday, around 2,000 people took to Austurvollur Square in front of Reykjavik’s parliament building demanding a popular vote. The protestors are also voicing their views in social media site Twitter using the hashtag #vor14, meaning spring14.

A recent poll by Gallup showed that 72 per cent of Icelanders are in favour of a national referendum, despite the fact that just 37 per cent actually want to join the EU. Some 47 per cent said they did not want to be part of the EU. Many have said they are joining the protests because they feel the government must stick to its word, not because they want EU membership.

Iceland applied to join the EU in 2009 on the back of the collapse of its three major banks. Those in favour of accession believe joining the block would stabilise the economy. People against it fear negative effects on the fishing industry.