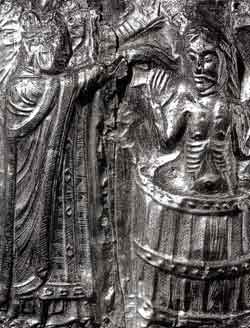 A sixteen year old treasure hunter, armed with a metal detector, has unearthed a bounty of ancient coins in a field in Northern Denmark, near Strandby.

More than 60 rare coins, from as far away as England and Germany were collected from the dig, after Michael Stockbro Larsen came across the Viking stash.

Rare Norse coins, known as korsmønter’, were found, emblazoned with a “rare cross motif attributed to Norse King Harald Bluetooth who is believed to have brought Christianity to Norway and Denmark,” AP reports.

It’s not unusual to find coins from abroad given the domination of the Vikings during the late ninth century, in an area known as Danelaw which they controlled, according to the British Museum. Different coins were issued in different territories.

It’s the first such find in over 70 years, creating much excitement. The coins will be on display at Vendsyssel Historisk Museum then later at the National Museum in Copenhagen.

A reward for Michael, his brother, and a friend has yet to be determined.