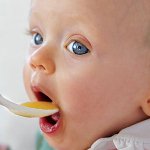 A family in Sweden got quite a surprise last week when they found a litter of dead rat pups upon opening a package of baby food.

Linn Kvick, a mother from Degefors, said she could clearly see several baby rodents when she opened the four-pack of Nestlé fruit puree. The small animals were completely dry and appeared to have been in the product for some time, according to a Nerikes Allehanda report.

She told the news agency, “It is so disgusting. I don’t know how it could have happened.” Linn’s partner Henrik Andersen added, “She came over to me screaming. At first I didn’t have a clue what the matter was. Every time I eat, I think about this.”

Officials from Nestlé have launches an inquiry into the matter, although Linn said that she did not receive the response she was expecting from the firm: “I was disappointed by the reception. They didn’t seem to think it was such a big deal,” she said.

The couple said they will avoid buying Nestlé baby products in the future.